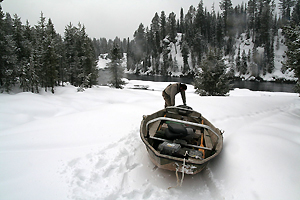 Where I grew up in Connecticut, the expression, "March comes in like a lion and goes out like a lamb,” generally holds true. As does the old saying that, "April showers bring May flowers.” I would imagine that there are already some early daffodils blooming in New England.

However, March and April in southeast Idaho only bring to mind the all-too-familiar term,"cabin fever.” At 6300 feet above sea level, Island Park is buried in the throws of winter each year until Mother’s Day at the earliest, and this winter has been one of the harshest in recent years. In order to endure the seemingly endless winter, one must learn to embrace the unique beauty that winter brings, and to take advantage of any break in the weather. There are all sorts of winter recreational opportunities in Island Park for those willing to wear a fewextra layers; snowmobiling, cross country skiing, bird-watching, drinking at the TroutHunter Bar, and, of course, fly fishing.

Jonathan Heames and I recently took advantage of a balmy 35 degree March day and floated the Box Canyon. This is the first winter that Idaho Fish & Game has allowed winter catch & release fishing in the Box--the perfect cure for a pair of fly fishing guides suffering from the winter doldrums. The boat ramp is obviously not plowed, so we launched my RO skiff from the dam road, and pushed it on top of the ample snow all the way down to the boat ramp, dropping several layers of clothing (and a few choice words) along the way.

he hard work getting the boat in the water was soon forgotten, as healthy rainbows rewarded us for our efforts. The water was cold and fish did not want to move to a swung streamer. However, they ate nymphs readily all the way to TroutHunter, where Jon Stiehl used the horsepower of his snowmobile to pull the driftboat from the river. Ending the day with a draft beer and a hickory burger at TroutHunter Bar, while reminiscing on the day’s fishing, it almost……..almost…….felt like June.
-Pat Gaffney