At tall elevation, the arrival of May marks the true end of winter, even in years like 2014 when Bonnie and I moved back to Island Park in a whiteout blizzard as heavy as any I have ever experienced. 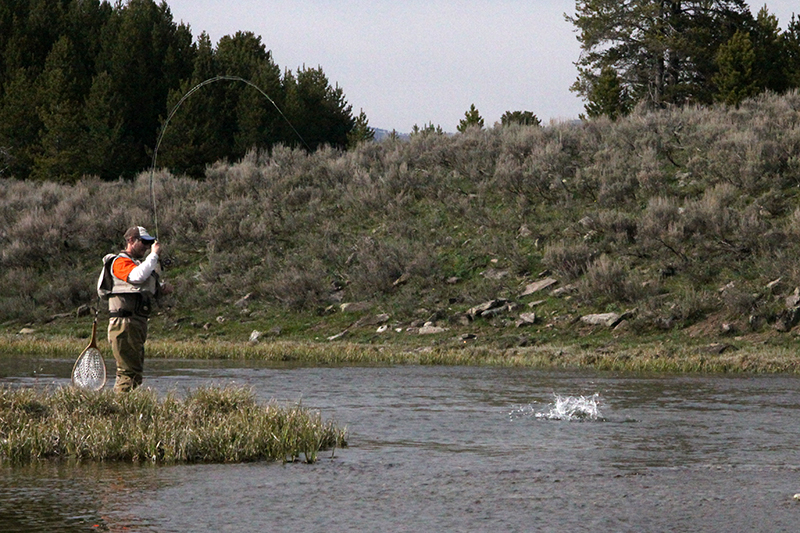 While remnant snow drifts from the winter past will often remain through most of the month, the greening of the meadows has lifted the gray tones of early spring from along the Henry’s Fork. Lime colored Aspen and the golden olive of budding willows proclaim deliverance from the gloom of mud season, and are exceeded in their brilliance only by the iridescence of Mallard Drakes that have paired with the more somber camouflage of the females in their annual mating ritual.

Life blooms in all directions as the young of wild creatures join the adults in the short seasonal journey back to winter. But all harshness seems forgotten at the beginning of five months of incomparable natural splendor in the high reaches along the continental divide where life can seem too perfect to be real.

May is a time of reunion with friends both wild and civilized, and some are actually human. Most welcome, however, is weather that is not as painful to old joints and winter weakened muscles as during the season from which we have just escaped.

While the physical comfort found in May would often be considered sacrifice a month or two later, there are occasional days of shirt sleeve weather. More often, however, we are comparing the replacement of snow, frozen rod guides, and numb fingers with rain, one less layer of clothing, and unprotected ears.

May also signals the beginning of hatches that do not create the eyestrain associated with early midges and Baetis. Insects size 14 or larger typically begin with Mother’s Day caddis followed closely by March Brown mayflies. And these are just a warmup for the big stones that will appear later in the month.

But it is the optimism and anticipation of a new season that brings the mental relief we all crave at the end of winter’s long confinement. Ideally, we have all our fly boxes restocked and any tackle repair or replacement has already been taken care of.

For a fly fisherman, May is an open gate to the wonders of great trout water, and that gate will remain open through a collection of days made special by multiple hatches, rising trout, and good company on the water.

News from the Henry’s Fork Foundation

Situated at the Del Rio Bridge, this property will be transferred to Fremont County to be maintained as a public access site along the lower Henry’s Fork.

Hoffner also notes that the Idaho Department of Fish and Game and Fremont County are also contributing to funding of the project.

Securing public access is part of the vital work being provided by the Henry’s Fork Foundation on an ongoing basis, and it is sincerely appreciated.

Also, those who have voiced concern for the movement of sediment from Island Park Reservoir into the river should be pleased to learn that the Foundation will be joining several other agencies in an effort to determine the cause of this recently observed problem.

Again, thanks to HFF for getting on top of this important issue.