It is only during the last four years that a winter drive to Last Chance from St. Anthony was not usually prompted by a business matter or a quick in and out visit with the TroutHunter guys. This changed rather abruptly when the water from Island Park Dam to the north boundary of the Harriman Ranch was opened to year round fishing. 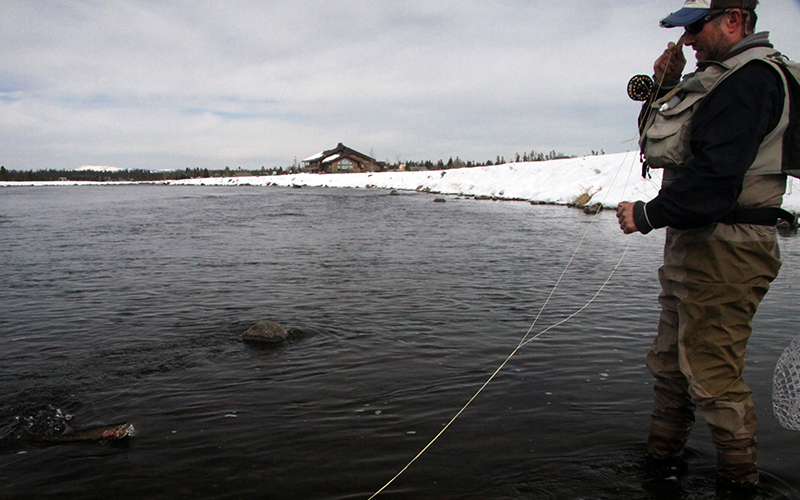 Much of the reason that Bonnie and I chose to spend the five coldest months of the year 35 miles south and 1500 feet lower than Last Chance has been based on fishing opportunity on the lower Henry’s Fork where most of the river is not subject to seasonal closure. A distinct advantage in weather conditions at lower elevation made it easier to fish near our winter home, even when fishing became allowed on one of my favorite stretches of the upper Henry’s Fork.

With four or more feet of snow along the banks of Last Chance Run, just getting to the water is a task better suited for a younger man, and it is normally well into April before I am tempted to head north. For this reason, it is quite strange to be reflecting on more than a half dozen trips up Ashton hill all made before April had even arrived.

With snow all but gone by mid-February downstream from Ashton, temperatures more than ten degrees above average accompanied fishing reports from Last Chance that were just too glowing to resist. Consistent midge activity was creating daily dry fly opportunity and Baetis as large as size 18 brought an even stronger appearance of trout on cloud darkened days.

Despite several feet of snow complicating access to the water, son Shayne and I joined Jon Stiehl on a day when conditions were ideal for the olive insects that mark the commencement of a long string of mayfly hatches that will continue until they are terminated by the beginning of another winter.

While only a test run, our day with Jon delivered a quality of fishing that made us forget the warmer temperatures and absence of snow left behind in the thirty minute drive to Last Chance. In water seldom more than knee deep and often less, trout up to 18 inches showed the effect of a winter’s rest from the constant angling pressure applied during the main season of June through October. For nearly three hours the trout seemed willing to accept any reasonable Baetis pattern drifted drag free on currents uncomplicated by aquatic vegetation. And as a bonus, we did not see another fisherman throughout Last Chance Run.

With each trip on the road to Last Chance the days became noticeably warmer while the snow withered to a progressively smaller obstacle. And the fishing just got better as the weeks passed by. But as must be expected when word of good fishing begins to spread and unseasonably pleasant weather prevails, we were presented with a weekly increase in the number of anglers who were sharing the same water. And while never crowded, the effect of more human attention was a proportionate elevation of selective feeding behavior on the part of the trout.

As I drove up U.S. 20 on my most recent journey to superior dry fly fishing, the local golf course was crowded with players enjoying 60? temperatures at a time when the greens would typically be buried in snow. A half dozen fisherman’s vehicles lined the parking area at the Fall River crossing and I saw three drift boats from the Wendell Bridge over the Henry’s Fork. Arriving in Last chance at just past noon I quickly realized that the relative isolation on this stretch of the river was vanishing as quickly as the snow. With skis and snowmobiles put aside for fly rods, mostly recognizable figures were scattered from lower Box Canyon to the Ranch boundary, and I parked along the muddy edge of the road to join them.

I remember few years when Bonnie and I were even tempted to move back to our Island Park home before Mother’s Day, but this might be a year when that will happen. However, if history is considered, I am inclined to expect at least one more round of winter type conditions and a very wet spring. That is just the way weather seems to work in Island Park.