Like the weather, a river is changed by the seasons. In October the Henry’s Fork flows are at about 25% of peak summer levels and the resulting changes in the fishery are multiple. This essentially applies to the slow water sections beginning at Last Chance Run and extending through Harriman to the water below Pine Haven. 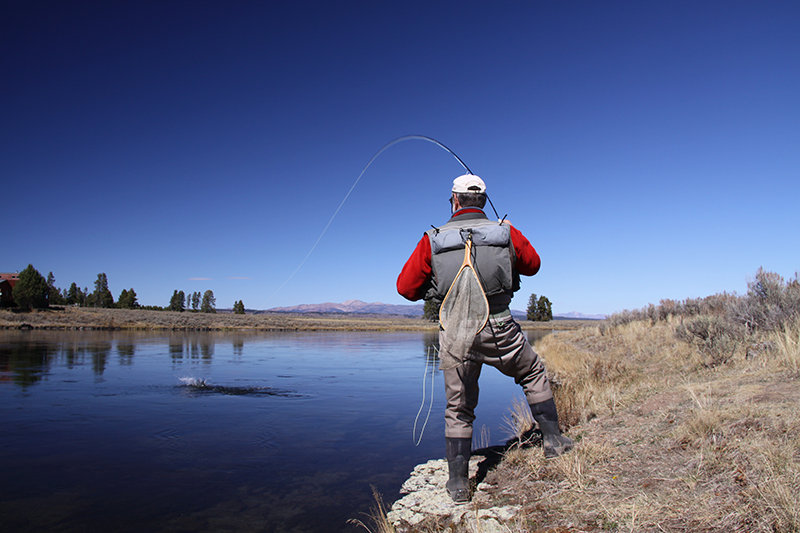 This is mostly wadeable water even when downstream agricultural demands push release of water from Island Park Reservoir to 1,000 cfs and above. Storing water for the coming year begins in early Fall when flows are reduced to around 300 cfs and often lower. Responding to a rather radical and abrupt change in their environment, trout begin to concentrate in winter habitat that features greater security in terms of water depth and structure. What this means is that even though big trout may be found feeding in surprisingly thin flows of a foot or even less, they are seldom far from the sanctuary of deeper water. Awareness of this behavior will assist a visiting angler who might deal with finding fish when previously occupied water becomes seasonably devoid of opportunity.

While low water provides advantages in access and wading comfort fall fishing produces complications that are not nearly as pronounced at other times of the year.

Aquatic vegetation, a necessity in the welfare of trout and insects, grows densely in the higher flows of summer. Losing a good fish in the weed becomes an increasingly familiar disappointment as the season progresses.

In the fall, vast expanses of exposed vegetation reduce the amount of open water in some sections and the tendrils are always close enough to the surface to disrupt the current and complicate fly presentation.

With only minor exception, fall hatches are small in physical size but their numbers can be astounding. Mahogany Duns in size 16 or 18 are a bonus through mid-October; otherwise you will be dealing with Baetis and midges if dry fly fishing is your objective. A size 18 is at the large end of the scale, and they range much smaller. 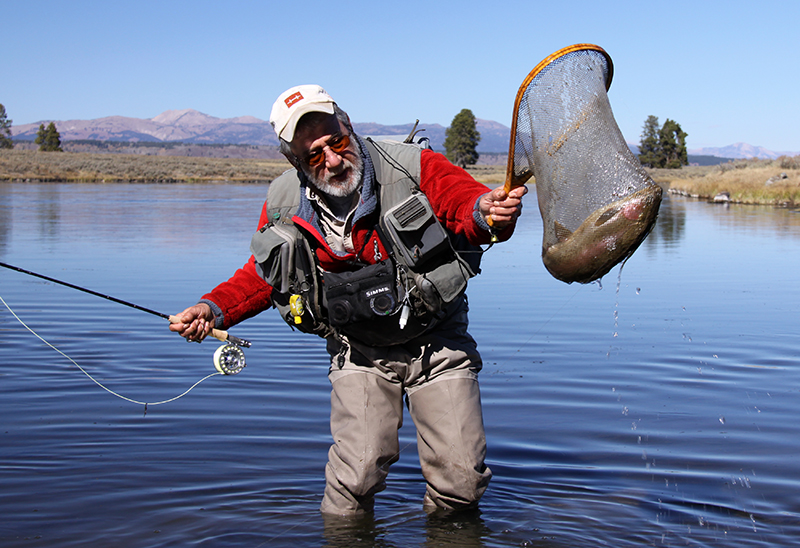 A high quality tippet of 6X or 7X is needed to accommodate imitations that probably average size 22. And while futility with regard to landing a big fish may instantly come to mind, bringing a 20 inch trout to net is not impossible even with such a delicate connection.

As a matter of practicality, tackle adjustments based on seasonal requirements will determine a particular rod, reel, and line to accommodate the extensive variety of opportunity available during a year of fishing in Henry’s Fork country.

Fishing streamers and other large subsurface flies on still and moving water will call for a 7 weight to handle a long cast and truly big trout. I like a 6 weight for float fishing or wading during Salmon Fly time and the Golden Stone hatch. Both insects require patterns as large as size 4, and most are quite air resistant. The size 10 and 12 Green, Brown, and Gray Drakes are best handled by a 5 weight, especially when making a long cast to cruising trout on the flats of the Ranch. A 9 foot 4 weight is the rod I carry on most days when a fly larger than size 14 is not likely to be necessary and a cast beyond 50 feet is a rarity. Fishing the small dries and nymphs that typify fishing the shallow flows of October is, for me, best accomplished with a 3 weight rod.

Low, clear water, tiny flies, and easily alarmed trout combine for some of the most challenging fishing of the year, especially when weed altered currents enter the picture. In a game of enhanced precision and delicacy, the light weight and small diameter of a 3 weight line permit a more subtle and controlled presentation that will put the fly where it needs to be and with a reduced tendency to alert a wary trout.

Relying upon stealth to minimize casting distance, I rely primarily on a crisp action, 8 foot 3 weight rod for fishing the small hatches of fall. A lighter line and shorter rod can be efficiently coupled with a 12 foot leader, which is considerably shorter than what I would typically use with a heavier line and longer rod. 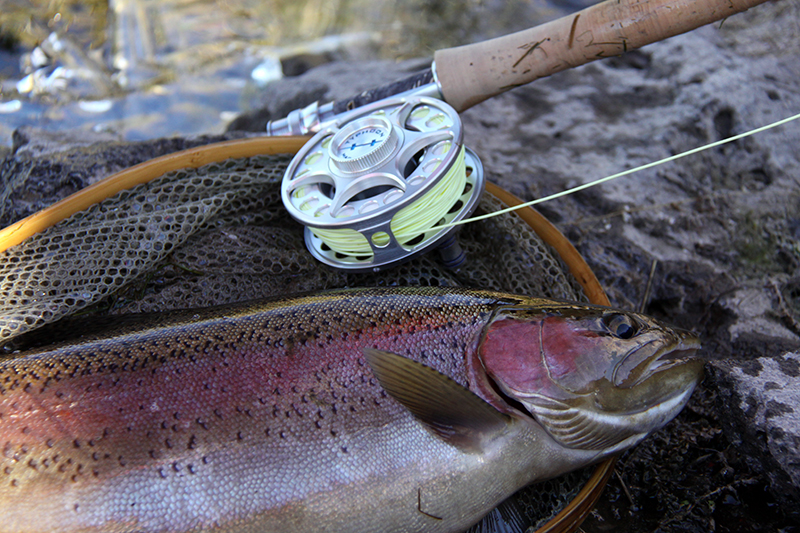 Keeping the distance to a target fish at 30 feet or less plays strongly into the accuracy of the cast and management of the drift. And of course, seeing a small fly is entirely dependent upon fishing at relatively close range.

An upstream cast from behind the fish is the most efficient method of approaching shy trout in thin water. Quite often, however, surface feeding trout are found tucked tightly against the bank, edge of an exposed weed bed or other locations where a different presentation angle is called for. A reach or curve cast from the side in these situations is less likely to disturb the fish than approaching from upstream where you will be far more likely to come into a trout’s window of vision before ever getting within reasonable casting range.

Controlling a big rampaging rainbow is never an easy proposition, regardless of the tackle being employed. However, a lighter action rod will do a better job of cushioning a fine tippet and precarious connection to a miniature hook. A smooth functioning reel with a reliable, adjustable drag system is also an asset when playing large trout on very light tackle. Firm, relentless pressure can quickly tire a trout but you must concentrate on its every move and be prepared to release line the instant forceful movement away from you is indicated. And while luck is likely to ultimately determine the outcome, elevated skill in the techniques of playing and landing big trout can result in a very satisfying accomplishment.

Fishing small flies on light tackle is a fitting end to the dry fly season where thin, gentle currents and big, wary trout combine to demand our best. We are carried into the long winter by those fresh memories of crisp, fall days and rising trout. And as fly fishers, we survive until spring largely on the strength of those memories.