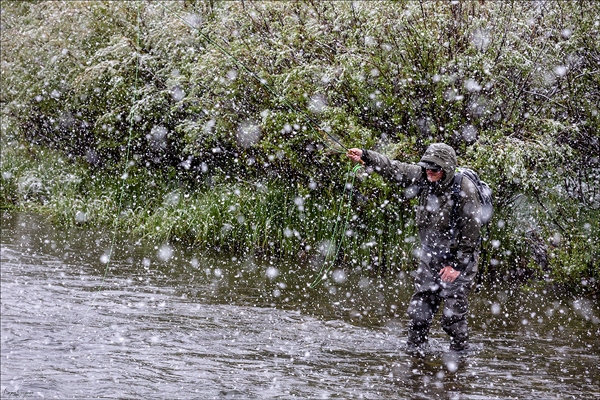 Like our ancestors and most other warm blood creatures, the instinct to leave the mountains of Island Park kicks in when the hours of darkness begin to noticeably exceed daylight. This typically occurs during the latter weeks of October and by Halloween we have settled back into our St. Anthony home which, like our summer place, is located in Fremont County, Idaho. And while the Henry’s Fork cuts through both communities, the differences outnumber the similarities when cultures are compared between societies separated by less than 40 miles.

Unlike most of their upstream neighbors whose interest seems to center around fly fishing, conversations in the coffee shops and taverns in St. Anthony always seem dominated by subjects pertaining to agriculture. Mention hatches, fly patterns, or the latest graphite rod in the Star bar and you might as well be speaking Chinese among people more interested in potato prices, the cost of diesel fuel, or the Government’s Farm Policy. But even among folks of varied positions, there is one topic that can transcend the respective differences between those who fish and those who farm.

Water, and the river from which it comes, is known to be the source of existence for the economic drivers represented by agriculture and sport fishing in Fremont County. And in years like 2013, residents who depend upon these two activities for their livelihood are fortunate to have the connection of two entirely different interest groups working toward the common good of the Henry’s Fork.

This year, a lighter than normal mountain snowpack and a very dry summer has disrupted the ability of water managers to provide the generous flows of the past 5 years. In the past, a drawdown of Island Park Reservoir to below 30% of capacity has resulted in thousands of trout being stranded below the dam when flows were shut down completely. Saving these fish required a massive rescue effort involving hundreds of volunteers. The mission extended for 3 days as otherwise doomed rainbow trout were captured and transported to the mouth of the Buffalo River a quarter mile downstream.

With history as a basis for concern, members of the Henry’s Fork fishing community were relieved to learn that 80-100 cfs will be allowed to flow from the dam which is adequate for fish survival until severely cold temperatures arrive.

According to Henry’s Fork Foundation Scientist, Rob Van Kirk, at least 180 cfs will be released from December through February, normally the coldest months of the year. And while certainly less than ideal for increasing the fish population, this flow should minimize loss of juvenile trout while permitting operation of the dam’s hydroelectric generation plant. Wintering trout may also find sanctuary in the Buffalo River via the relatively recent completion of a very efficient fish ladder. Based upon current information, it appears that the Caldera section of the Henry’s Fork is not facing the likelihood of anything catastrophic during the coming winter. However, it is important to acknowledge the need for a big snow year to avoid a repeat of problems associated with low flow in rivers throughout the northern Rockies in 2013.

In order to place the significance of flow management during years of low water supply into perspective one must remember that the fishery below Island Park Reservoir has not always been given the consideration it now receives. It is only since formation of the Henry’s Fork Watershed Council in the 1990’s that all who have a stake in the well-being of the river also have a seat at the table and a voice in how it is managed. With the Henry’s Fork Foundation and Fremont-Madison Irrigation District as co-facilitators, a remarkable new balance has been achieved when addressing the multiple threats to this vital natural resource. Dodging the bullets of draught, dam repair, and bridge replacement headline a number of recent issues that reveal the efficiency and value of this cooperative organization.