A September snow arrives silently in the high country like an uninvited guest. And while not a lasting feature of early autumn, the white messenger issues a sobering reminder of what lies directly ahead for the Henry’s Fork community.

For those who are economically dependent on a busy summer, October brings the relief of a slowed pace brought about by a thinning of visiting anglers and the return of an eight hour work day that is as much as five hours shorter than during the peak of the fishing season. Pleasant temperatures in the 50-60? range are typical of late morning and early afternoon but they are often replaced by ice on the water’s edge and sunset can be accompanied by temperatures hovering around the freezing mark. A later start and earlier finish to each work day combined with fewer marathon sessions of consecutive days on the oars have a noticeable effect on hollow eyed river guides who can now begin to become reacquainted with normal life and the relationships that are put on hold for nearly half of the year. 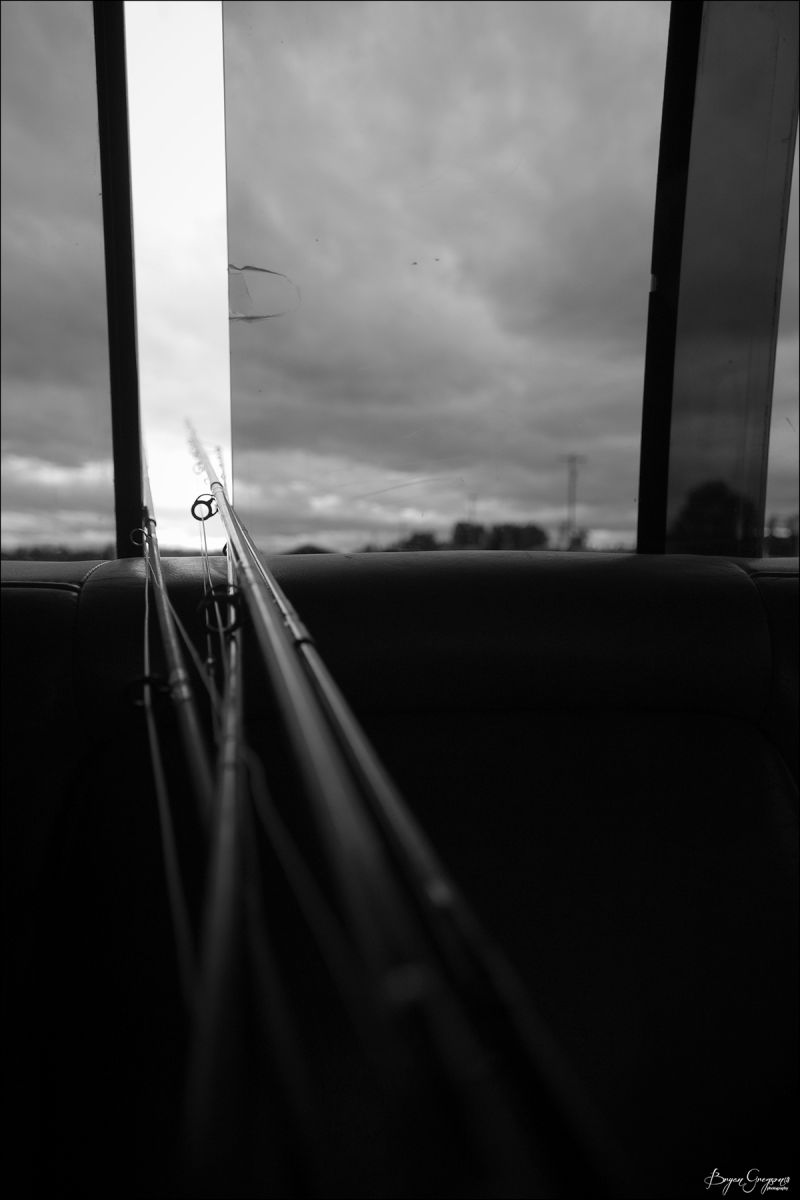 Although spared the physical rigors of guiding, fly shop and restaurant staff are not immune from the pressures of a constantly changing clientele and a demanding work schedule that allows far too little time for personal needs. In fall, the smiles that are not forced and their fishing stories become their own as the reason they live here is reclaimed.

Seriously depleted by summer’s end, the renewal of energy provided by a lighter burden of responsibility is demonstrated by evening gatherings around the fly shops or saloons where spirits are high and the conversation is always lively. Comprised mostly of locals but augmented by a handful of familiar visitors who return at this time each year, it seems everyone knows each other. From a cultural standpoint, it is a revealing time when sharing is never more liberal and contentment is the dominant mood but there is an underlying urgency for residents who attempt to capture the special opportunities of a season that always seems to end too soon.

Although hunting comes into the picture for many who call the mountains home, it is fall fishing that calls most strongly in Henry’s Fork country. Largely relieved from the daily pressure of the warmer months, trout in the river exist in a more relaxed state as they rise freely to late hatches of Baetis, Mahogany Duns, and midges. Remnant hoppers and other terrestrials remain attractive on the warmer days and sight nymphing becomes especially productive with the improved visibility of especially clear water that accompanies the lower flows of the late season. However, this is not to imply any weakening in the requirement of precise casting and presentation as well as accurate imitation of the prevailing food source. Other demands of fall fishing on the Fork include the ability to handle extremely small flies on the lightest of tippets and successfully approaching fish that may be feeding in mere inches of water. Tricky currents flowing over aquatic vegetation accumulated over several months can complicate the drift of the fly and the big rainbows have learned to quickly gain freedom by burrowing deeply into the heavy weed beds. And while there can be golden days of summerlike conditions, the best hatches often occur on cool, overcast days that can also feature rain or even snow. 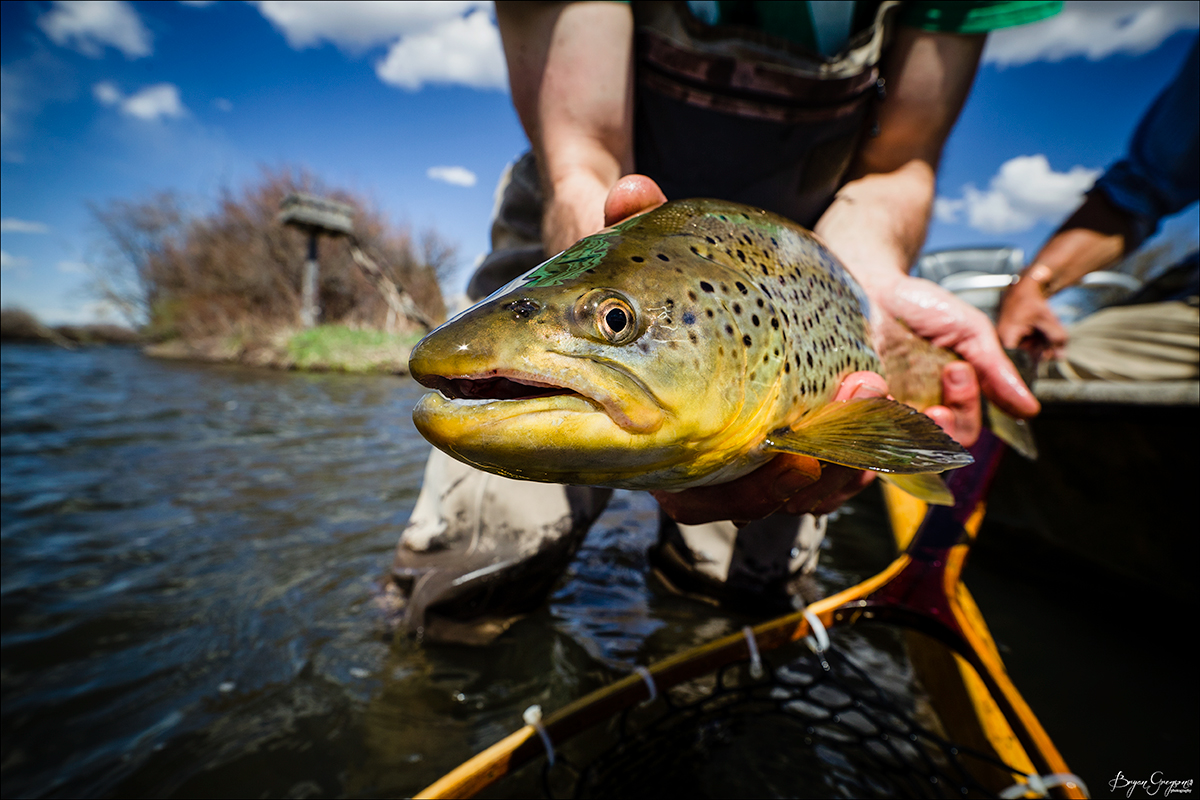 Through October, a day of reasonable weather conditions will not find the river deserted but the sparse number of regulars found on the water at this point in the year are generally courteous and are not inclined to disrupt their fellow anglers. With freedom of movement and plenty of open water assured, there is an intimacy with the river not always found in other seasons.

Although the moving portions of the Henry’s Fork attract the greatest attention internationally, the still water contributors to this famous river certainly warrant attention when the conversation turns to exceptionally large trout. 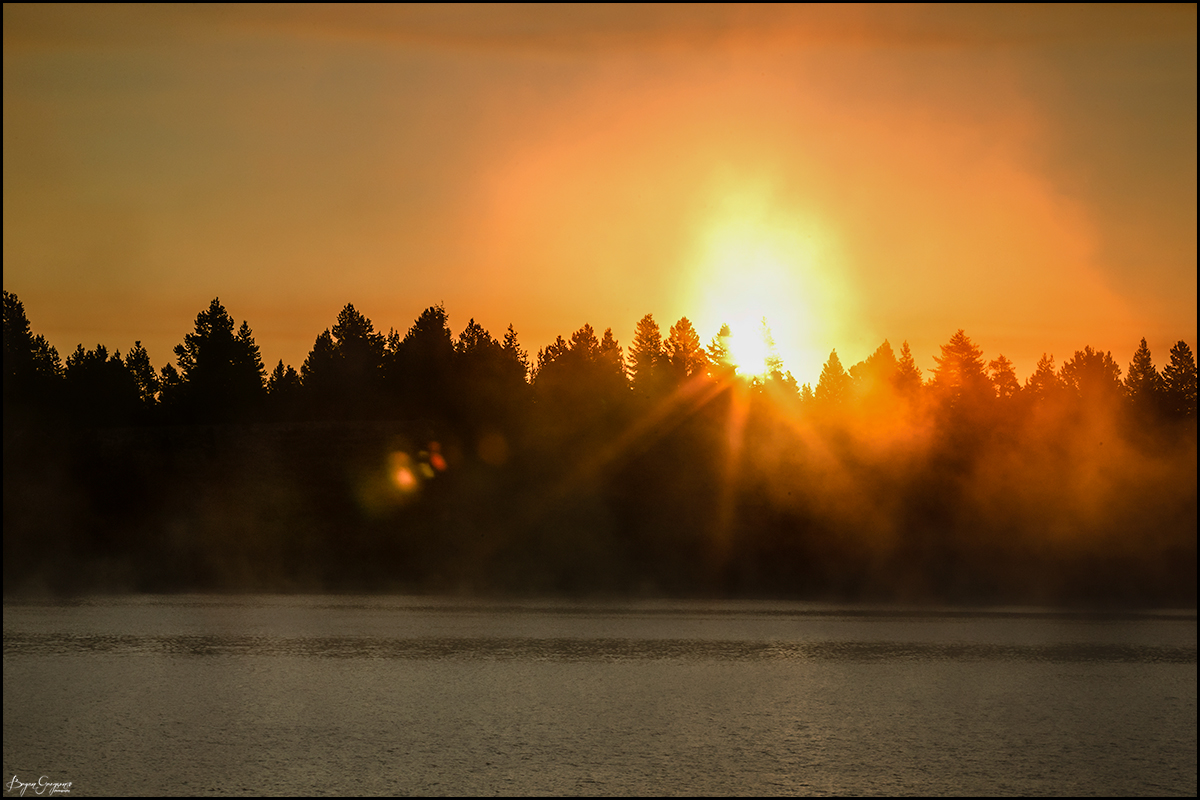 Guides whose fishing pleasure is primarily derived vicariously from the success of their clients through most of the season frequently choose Island Park Reservoir, Henry’s Lake, or the private lake on Sheridan Ranch for a personal reconnection with fishing that often goes unattended during their prime earning months. With free time and big trout as their continual objective, these dominating human predators find fall to be a unique opportunity to apply the skills that only be described to a paying client.

It is likely that cooling water and changing light conditions trigger an instinctive response in wild trout that prepares them for the lean times when their world becomes overtaken by the frigid conditions of winter. Aggressive feeding activity that can border on gluttony becomes normal behavior as they pack on as much fat as their bodies can store. And on Henry’s Lake, for example, the right fly fished at the right depth in fall can produce almost unparalleled action with the potential for the fish of a lifetime on practically every cast. The lake can be a busy place during weekends and on warmer days but conditions from mid-October on have a way of thinning out those of weaker resolve. 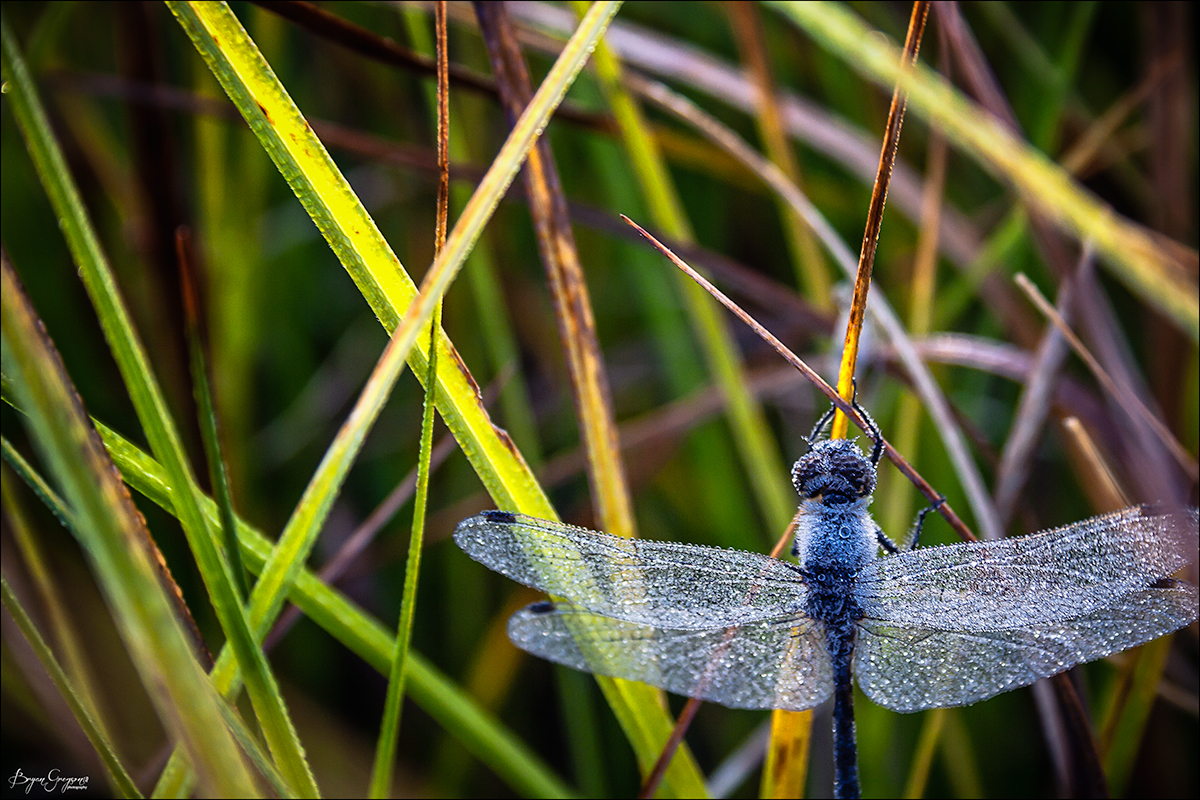 A boat provides better range but even the largest fish will cruise the shallow edges which makes wading the shoreline a practical method of fishing Henry’s Lake. Leeches, streamers, and scud patterns fished on a slow sinking line are reliable flies with suspended midge patterns on a floating line also a good fall choice.

In most years, the first signs of autumn begin to appear in late August when the Aspen begin to change color. Fall hatches and Baetis can overlap with the last of summer mayflies like PMDs, Callibaetis, and Tricos, and this will continue until night and morning temperatures regularly dip below freezing. Fishing in shirtsleeves remains common through much of September but a jacket should be kept close by as daylight hours begin to shrink. 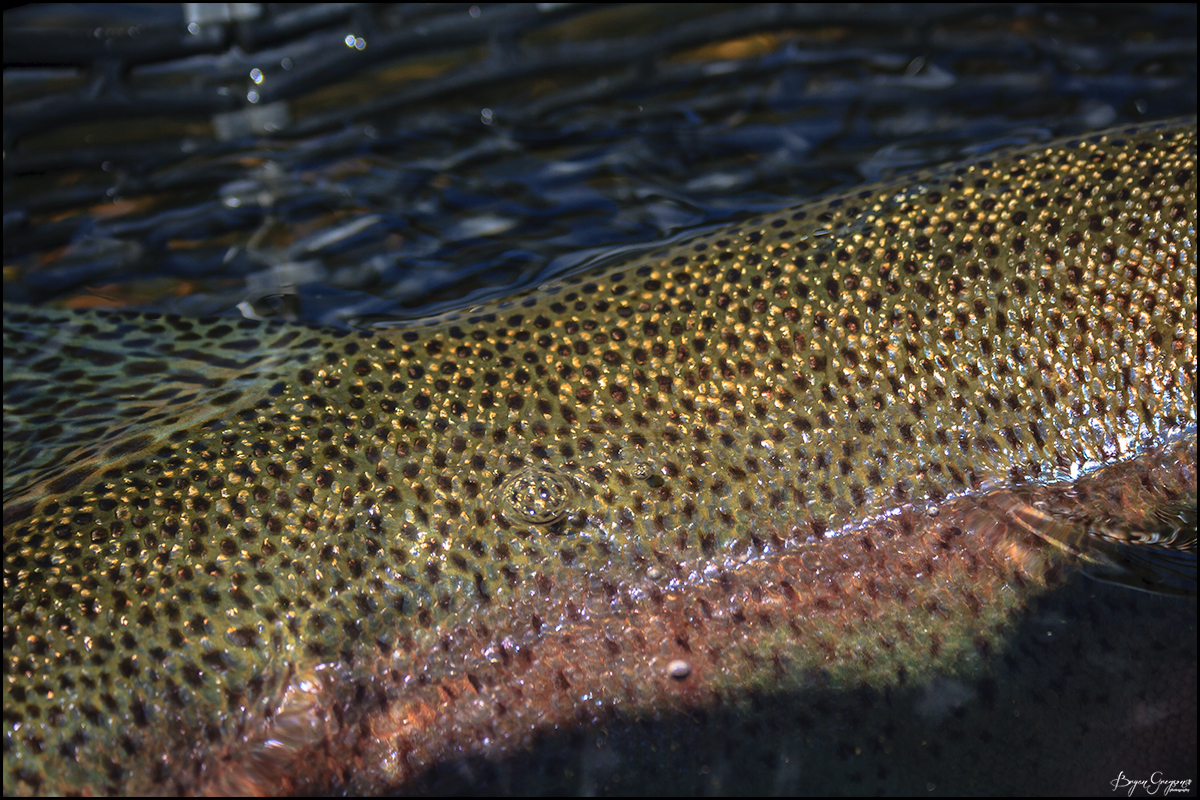 By early October snow can appear on any day but it is also a month when temperatures can rise into the 70’s. Even a foot or more accumulation can vanish within a day or so, but snow beyond Halloween can remain until May. Winter above 6,000 feet can easily stretch for as long as 6 months and the sanity of residents who remain can be severely tested before its end only a few weeks before Memorial Day. However, a year of abundant snowfall is like money in the bank for those who choose to call the Henry’s Fork home. It is the water that gives them life and without snow the river would not exist.