"Gareth is not an angler, he’s a bloody beast”. But it was not insult that Charles Jardine intended when describing his friend and fellow Brit Gareth Jones. 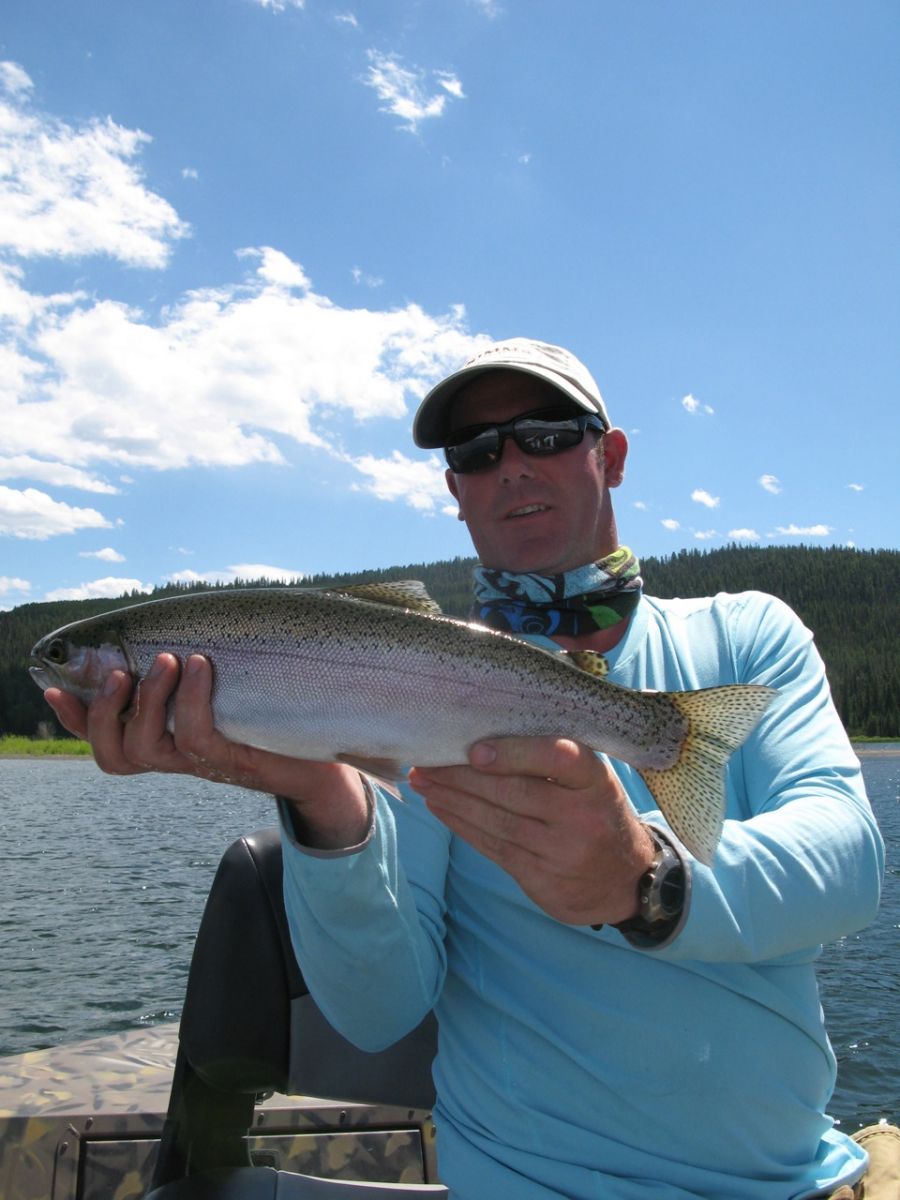 Anyone who has ever fished with Gareth understands that he brings an uncommon approach to fly fishing. And while still waters are his specialty, no obstacle of location or condition can assure a trout’s safety when the man from Wales moves into action. This fact was not lost on the Henry’s Fork when a July visit was greeted by extreme summer temperatures and unusually high flows of less than ideal clarity.

While hatches and dry fly opportunity were sparse, Gareth would not be deterred from introducing himself to as many Henry’s Fork rainbows as possible. His ability to spot fish that would easily be missed by most anglers was made less impressive only by the number of trout he was able to subdue on the first day of a week-long venture that would cover a variety of lakes and streams. Relying mainly on self-devised sight nymphing techniques, Gareth kept Bonnie busy with the camera while demonstrating a mastery of overcoming difficulty beyond what is typical on a river known for being difficult.

Boobies, the Clothesline, and straight line nymphing were unveiled as still water techniques on day two. Sunrise found Gareth and me in an 18’ power boat piloted by Brandon Prince. A lake obsessed angler himself, Brandon had laid out a plan that would put us on two splendid but distinctly different lakes in the same day. We would fish Henry’s Lake beginning at 5:30 A.M. then jump across the Idaho Border into Montana four hours later to catch the Gulpers on Hebgen Lake only 15 minutes away. 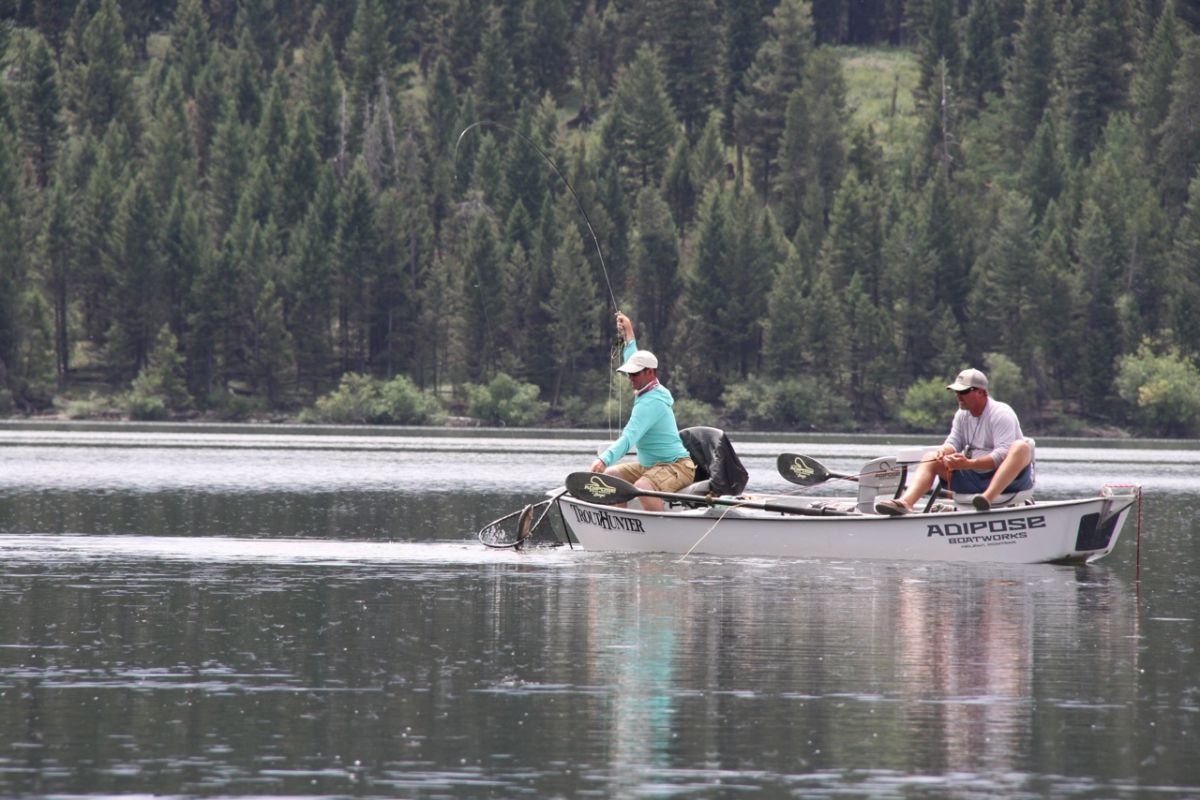 Anticipation is the word on Henry’s where every cast holds the potential for an oversize cutthroat, brookie, or one of the giant hybrid cut-bows that can weigh more than 15 pounds.

As is always the case, time flies when you are fishing, and the four hours allotted for Henry’s left Gareth hungry for the proverbial one more cast. While certainly respectable on a morning when few were catching any fish at all, none of the half dozen or so trout he landed were above the average standard of about 17”, and we knew he wanted more.

Within minutes of launching on Hebgen, Gareth was fishing a dry dropper Callibaetis rig to cruising browns and rainbows that proved less than hospitable to our Welsh friend. A light hatch of the speckled mayflies was not adequate to keep the fish near the surface for significant time during their sporadic rising, and the catch rate was relatively slow during the 3 hour hatch. 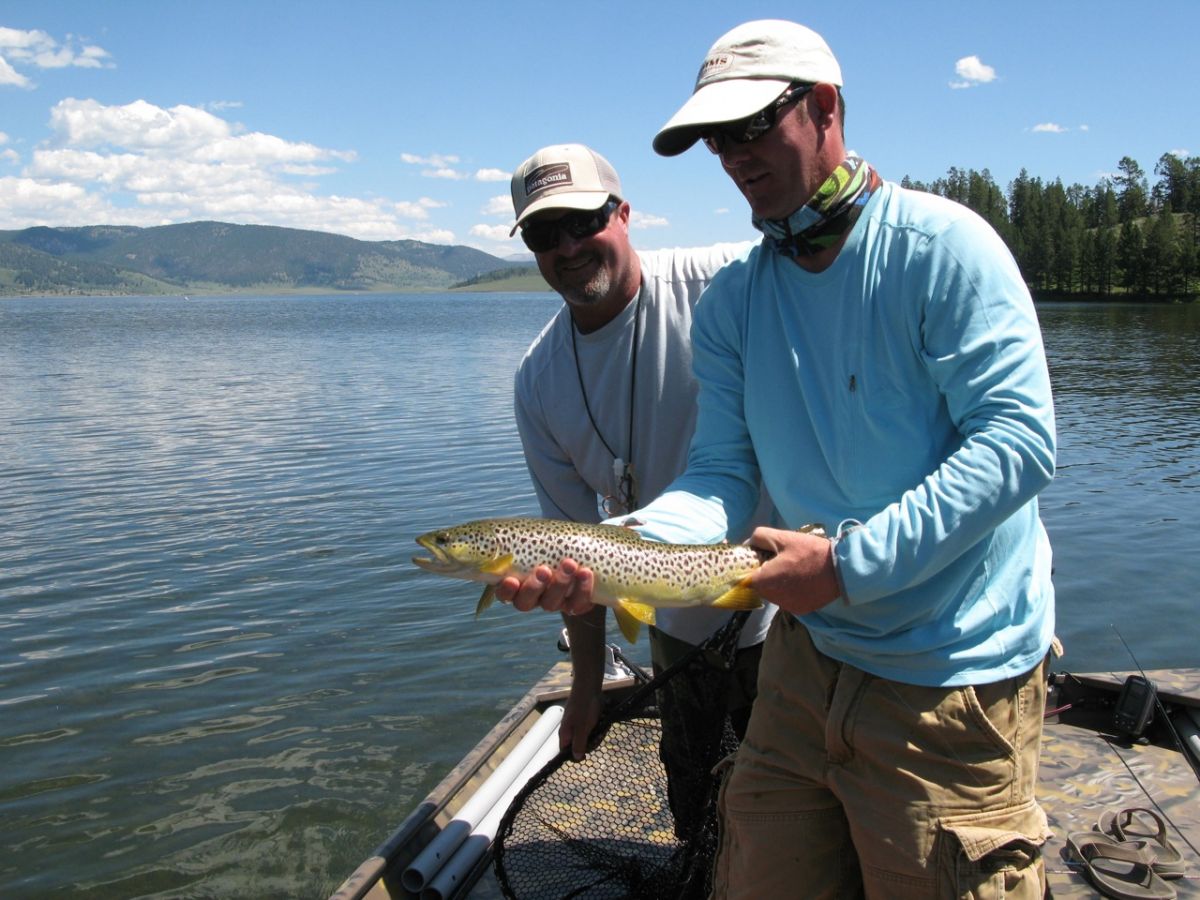 With less than a dozen fish to his credit, Gareth took command of the boat as we cruised the edges in search of submerged targets that are typically immune from angler attention when surface activity ends. In shallow, slightly riffled water, Gareth’s accurate casting applied serious discomfort to the unsuspecting fish that finned along the shoreline in sheltered bays.
It was the same story at the mouth of a small tributary where sizable trout lay undetected by surrendering anglers that were beginning to leave the water at just past noon. 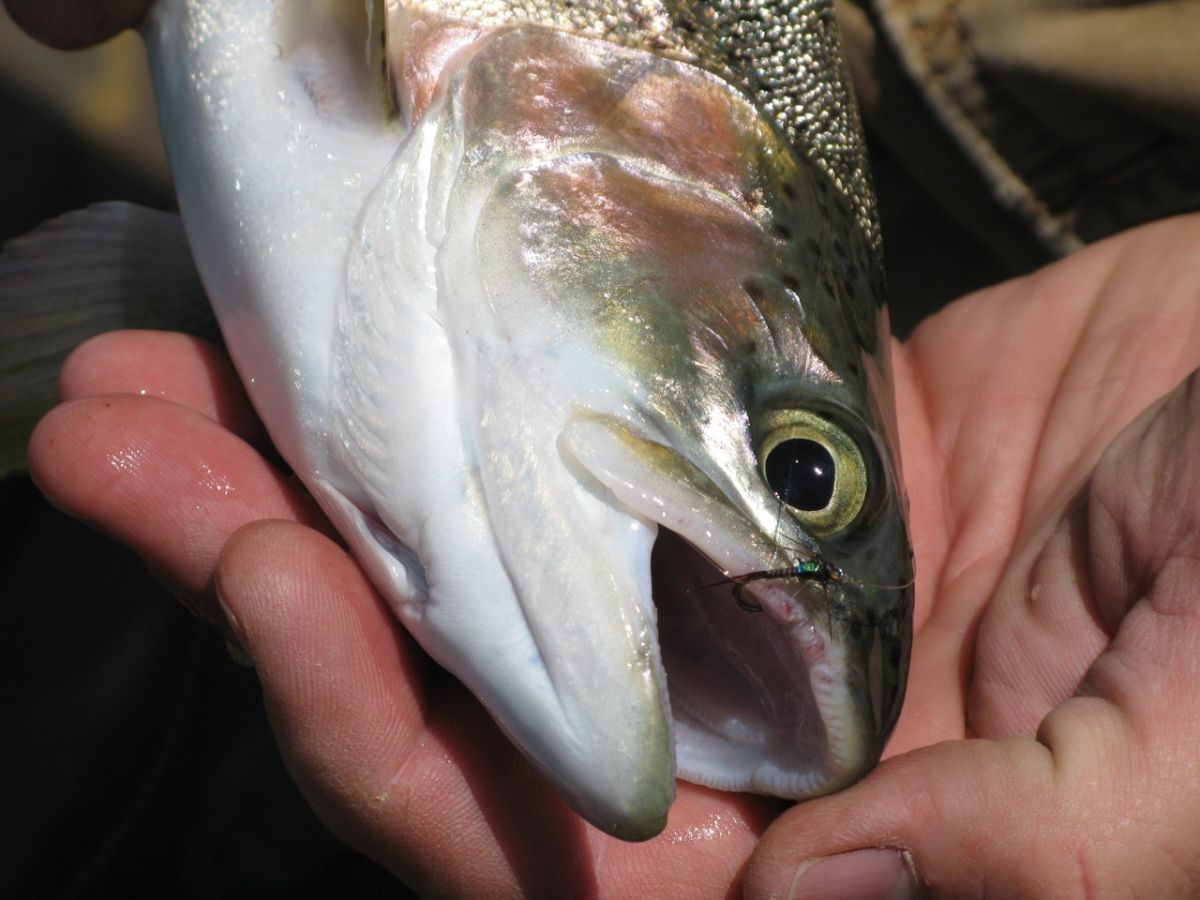 As is typical in the Rocky Mountain west, an afternoon wind put a chop on the surface that, for most, spells the end of fishing on Hebgen. With competition for water essentially nonexistent, Brandon and I were introduced to the real talent of Gareth Jones, and the reason he is held in such high esteem as a master of still water came into full display.

As a formidable predator beyond common, Gareth applied his remarkable memory and astute ability to recognize occupied water to extend our productive time on Hebgen beyond anything I had ever experienced.

Remembering the general locations where trout had shown themselves earlier, Gareth directed placement of the boat in water he knew would hold fish. Using a floating line and 4 flies strung along 20’ of leader, Gareth incorporated a straight line nymphing technique in a fruitful probing of deep water that lasted until late afternoon.

Perhaps conquering is too strong a term to describe his performance in conditions that would defeat even seasoned regulars, but Gareth certainly has left his mark on the trout of Hebgen Lake. 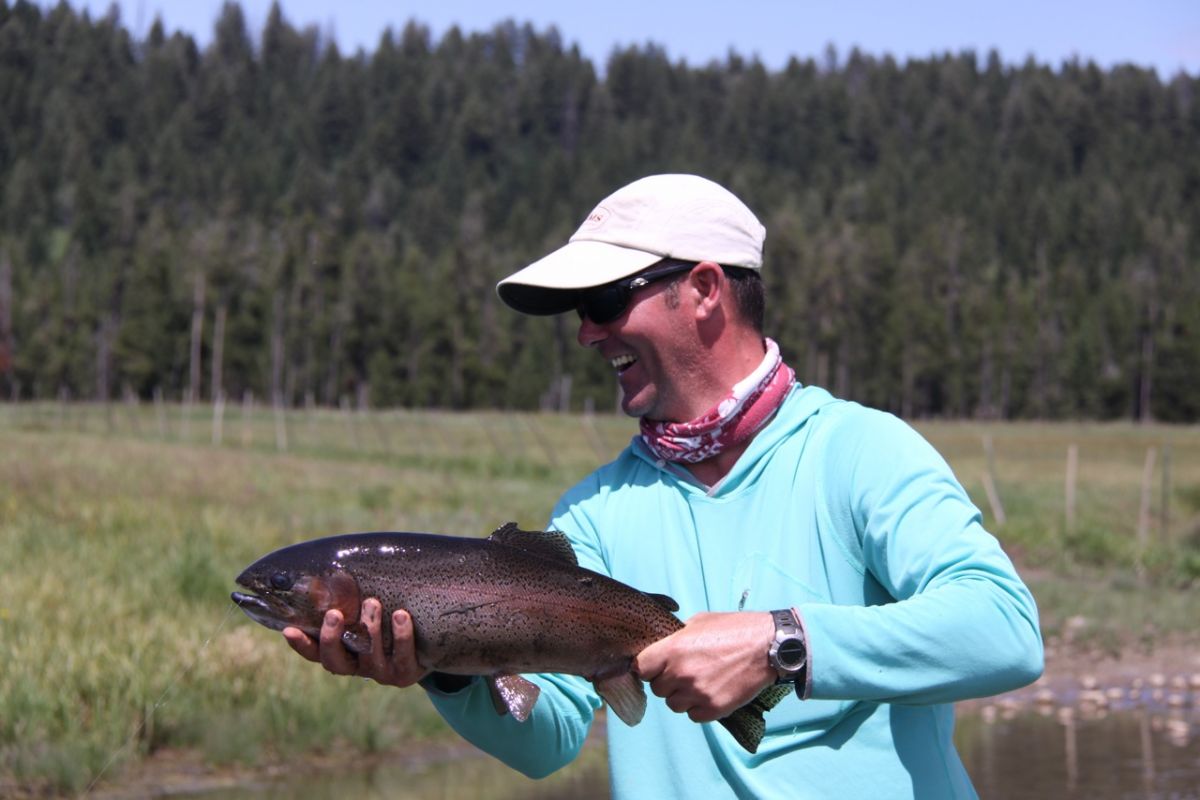 The guides call it Disney Land, and all at TroutHunter were looking forward to learning how Gareth would fare on the trout laden lake and spring creek on Sheridan Ranch. A private fishery, its waters are managed for trophy size Kamloop rainbow in the lake and Steelhead Hybrid rainbow in the creek.

I was not surprised when Gareth and Brandon were again up and running at 4:00 A.M. in order to be on Sheridan at dawn. Joined by Jon Stiehl and Rich Paini, Bonnie and I arrived at the lake 3 hours later to witness the carnage.

Although limited to 8 anglers per day, Sheridan is a moody lake that must be read and fished correctly if one is to prevail over its sizable occupants. 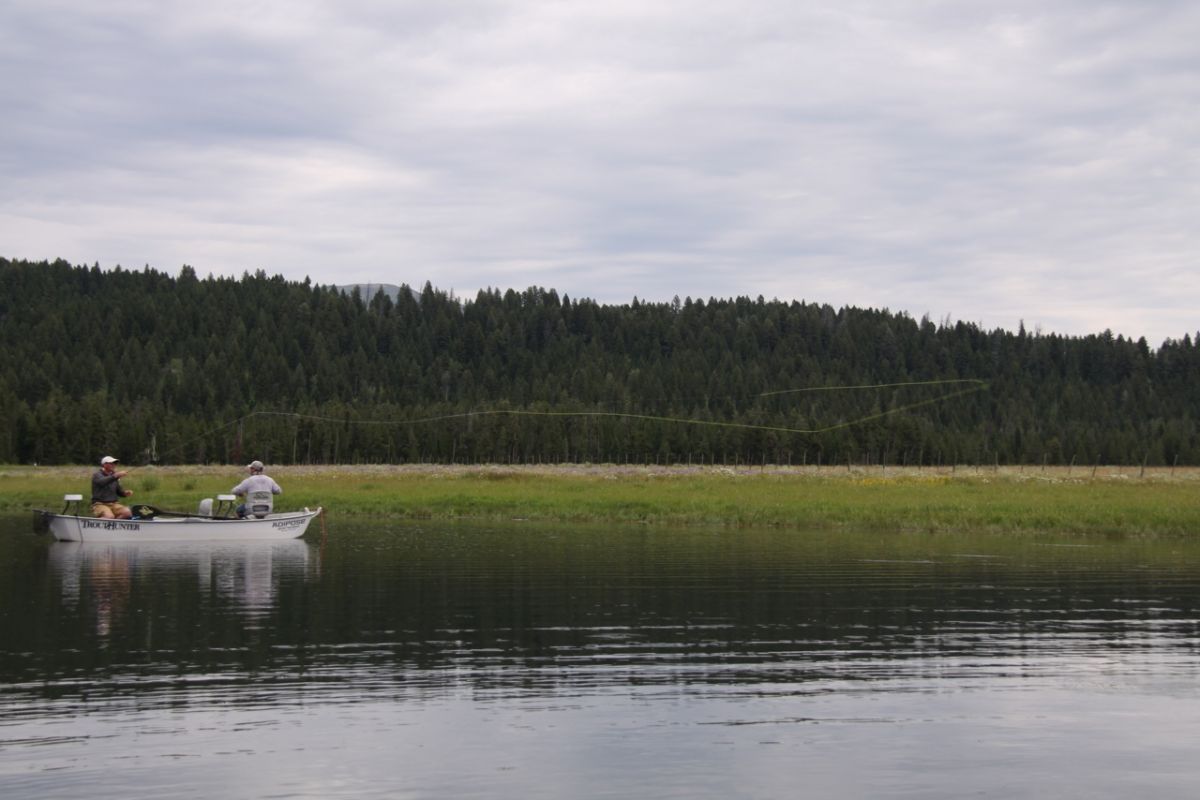 Even at a distance, Gareth is impressive to watch. From a seated position in Brandon’s drift boat, his routine of casting the entire fly line separated the two before we were close enough to identify which angler was Gareth.

Dry fly opportunity in the form of midges, Callibaetis, and Damsels helped to add diversity to the fishing, but Gareth continued to rely mostly on the straight line nymphing method that had worked so well on Hebgen. With an estimate of at least a hundred fish touched, Gareth finished 7 hours of the lake with a Kamloops that was 5 or 6 inches short of the 30 incher he had spotted in the narrow channel on the upper end.

Moving the short distance to Sheridan Creek after a late lunch, Gareth got down and dirty on the big stream fish that lie in some of the deeper, faster pools. Again, he was reaching fish that most others would never touch or even see. Nymphs fished on a long leader and no floating indicator were a revelation to companions unfamiliar with this European technique. But learning is something we all expect when fishing with Gareth. 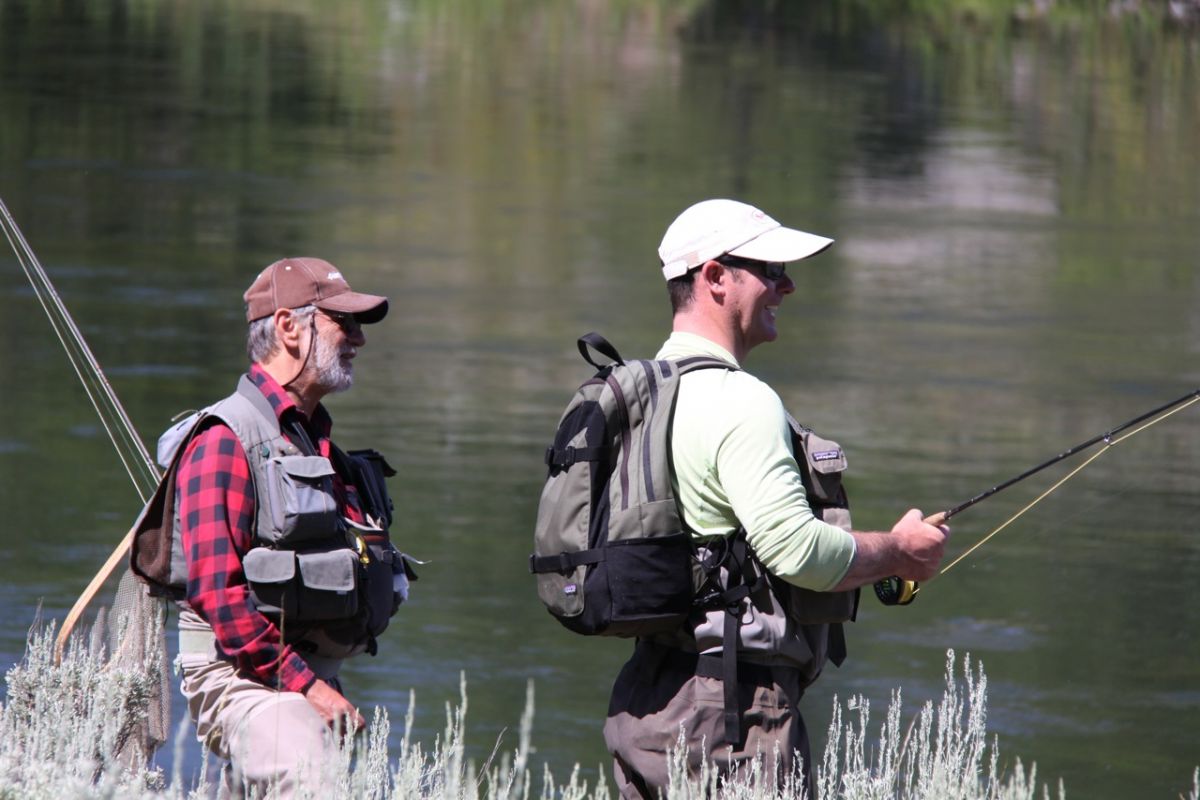 We arrived back on the Henry’s Fork at a more civilized hour to find a slight improvement in water level and clarity on day 4. A modest spinner fall had the fish looking up at about 8:30 A.M. and Gareth wasted no time in spanking a very respectable fish on a fine upstream presentation. Several more dry fly touches followed over the next hour or so but as expected, the larger trout turned their attention to emerging PMD Nymphs over a long, dense weed bed that harbored dozens of big rainbows. This is the toughest fishing we are compelled to deal with on the Henry’s Fork and it can leave even the best skilled regular shaking his head in exasperation. Although his numbers were not high, Gareth made an impressive showing on fish that became nearly impossible to fool. 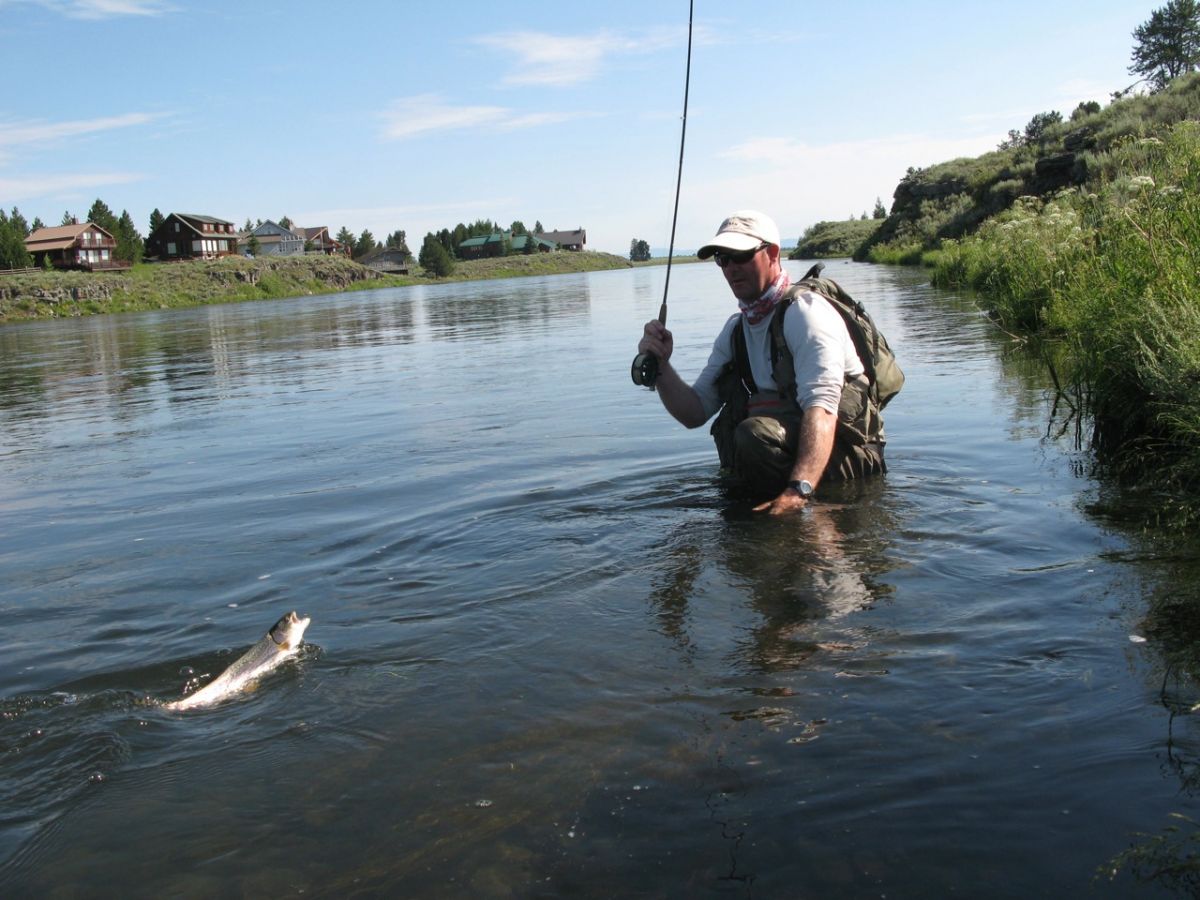 Hatches subdued by a piercing sun and a hot wind that swept away our ability to locate nymphing trout brought logic to the decision to exit the river at a time when a cold beer made as much sense as anything. Breaking from the fishing a little earlier than usual, I knew Gareth was already planning for his final day on the water before returning to Wales.

Knowing Gareth’s fondness for Henry’s Lake and that he had left some unfinished business there several days earlier, his plan to again be on the water at sunrise was no surprise to any of his friends at TroutHunter. While redemption was needed only in his own mind, the pull of something more impressive would not be denied.

The second day on Henry’s was wholesale manager Tom Watkins’ first opportunity to observe Gareth perform his still water wizardry at a time when the lake is at its most perplexing. It was not clear whether Tom was more impressed by the size and number of trout hooked or by Gareth’s ability to cast beyond 100 feet with what appears to be only modest effort. And true to form, Tom graciously expressed gratitude for Gareth’s patience in explaining the techniques that he too was able to utilize during their day together. 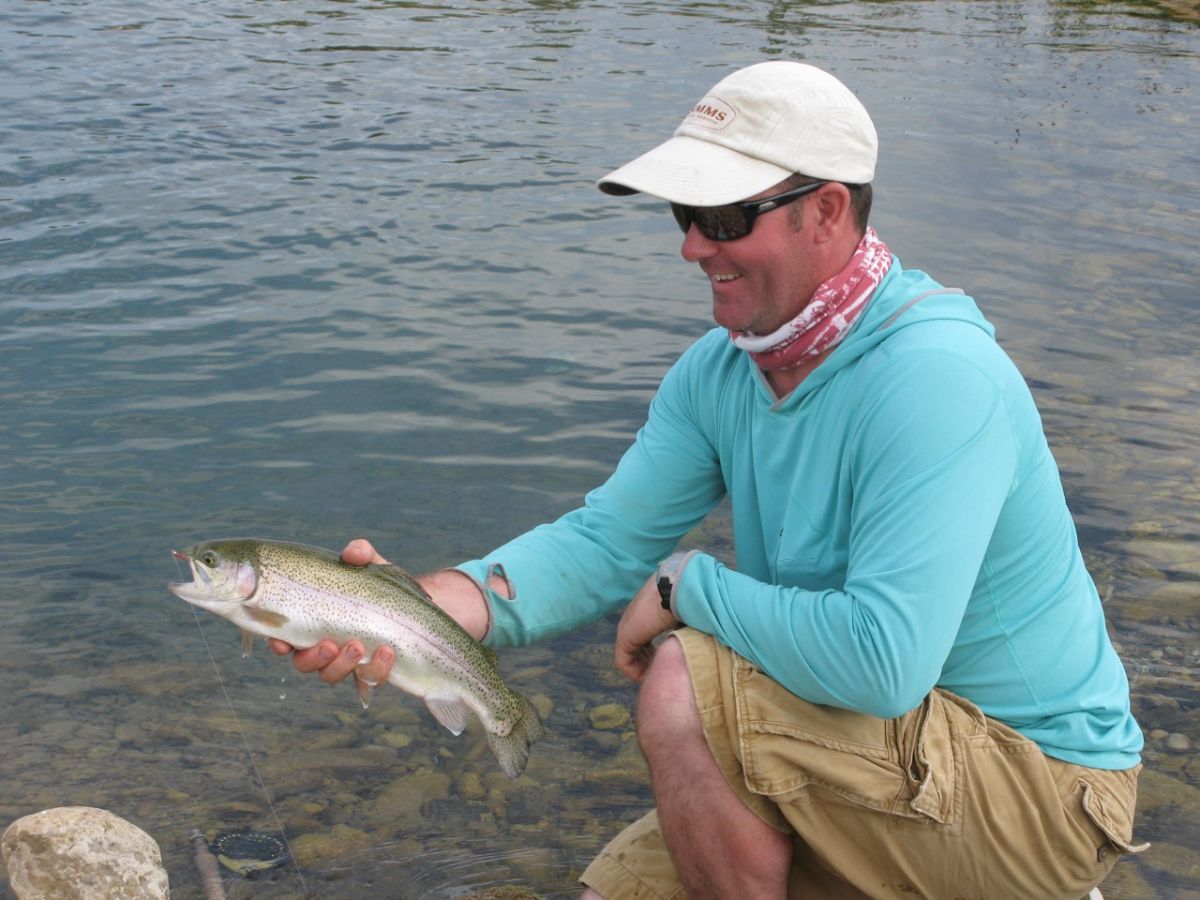 Although the big hybrids had eluded Gareth’s attention on that day, there was no disappointment expressed toward several dozen brook trout and cutthroat that ran as large as 4 pounds. It was a fitting end to a week filled with magical waters, splendid trout, and the talents of a friend who never ceases to impress.

If relentless tenacity and a remarkable skill set that seem able to overcome the most adverse conditions of weather, water, and trout are the characteristics of a beast, then Gareth Jones meets that description. However, his friends on the Henry’s Fork know him as a gentleman and enthusiastic companion who simply lives to fish. And unlike the trout that must suffer his persistent attention, we all look forward to his return.