magine broad, clear water meandering gently through open meadows ablaze with wildflowers harboring a host of nesting bird life. When copious hatches of aquatic insects and the presence of sizable rainbow trout are added to the picture, you arrive at the conventional perception of the Henry’s Fork. But the ten mile section that includes the Harriman Ranch portrays only a fraction of this world renowned trout stream.

The Henry’s Fork actually becomes a composite of several rivers and many smaller tributaries as it travels from its source at Big Springs to an appointment with the massive South Fork of the Snake, a distance of more than sixty miles. Changing constantly as it gathers volume and loses elevation, it is a river of multiple personalities that, to varying degrees, are attractive to the adventurous fly fisher. And no river in my experience displays greater diversity of character as it courses through canyons, forests, and meadows before entering the pastoral Snake River plain.

Though now mostly limited to its upper reaches, Yellowstone Cutthroat is the native trout species. But for nearly a century the Henry’s Fork has been known primarily as a rainbow fishery, and for most of my life these are the trout that have dominated my thoughts and attention. Like others who treasure the exceptional fly only water, I am drawn to the extremely selective feeding behavior and spectacular fighting ability of trout that survive primarily on insects and live for a surprising span of time. But in relatively recent years a different adversary has entered the picture, and the big rainbows of the Henry’s Fork now have serious competition for my attention.

Brown trout were among many personal discoveries that came as a result of expanding my fishing range during the late 1960’s. Adventuring into the neighboring states of Montana and Wyoming placed me in contact with waters that possessed characteristics unfamiliar to a young angler who had spent most of his first twenty five years in near complete loyalty to the Henry’s Fork. Exploring the Fire Hole, Madison, and Montana spring creeks was a significant factor in gaining the ability to appreciate diversity in fly fishing, and each revelation was relished by a young angler with serious ambition in the sport. I remember with great clarity the first brown trout that accepted my fly, and the influence of that introduction is ongoing.

Distinctive in coloring and secretive in nature, browns can take on an almost menacing attitude when they grow to large size. With powerful jaws and the teeth of a formidable predator browns are largely piscivorous as adults, which accounts for their ability to reach size not often attained by other trout species. But in waters possessing substantial insect life, browns are known to become a desirable target for a well presented dry fly. It was these contrasting characteristics that inspired seasonal journeys to more distant waters where brown trout were the primary objective. Summer hatches and the promise of big, rising browns led me to such notable destinations as the Missouri and Big Horn rivers in Montana. In late fall, when most dry fly fishing becomes relegated to a recent memory, streamer fishing expeditions to remote rivers like the upper Green in southern Wyoming brought contact with some of the most memorable browns I have ever encountered. Though distant travel and brown trout are no longer synonymous, the imprint of those venturesome trips into unfamiliar territory is a component of who I am as an angler, and they will be remembered always with fondness.

While details of the exact time and circumstances of their introduction are not clear, I recall that brown trout began to show up in the Henry’s Fork in the 1970’s. Barricaded from upstream expansion by the towering Mesa Falls, the brown trout population originated near the mouth of Warm River then gradually began to penetrate downstream. For more than a decade the new residents were only minor contributors to a trout population dominated by rainbows. But with insect numbers roughly equal to those present in the fly only water twenty miles upstream and abundant numbers of non-game fish as additional forage, the more voluminous lower river was perfectly suited for the fledgling colony of immigrants. By the end of the twentieth century about one of every fine trout taken between Warm River and the town of St. Anthony was likely to be a brown, and that ratio continues to grow.

As is typical with the species, Henry’s Fork browns generally prefer sheltered water during bright conditions. Structure along the edges in the form of large rocks or tangled snags are favored retreats for these unsociable fish that defy casual effort on the angler’s part. Precise casting combined with a vigilant eye for an obscure target is mid-day requirements when the sun is high. And the most innocent surface disturbance can conceal a feeding brown of shocking size. An overcast day can lead to bolder behavior during a hatch but, otherwise, low light times of morning and evening are the best times to find big brown trout in open water. 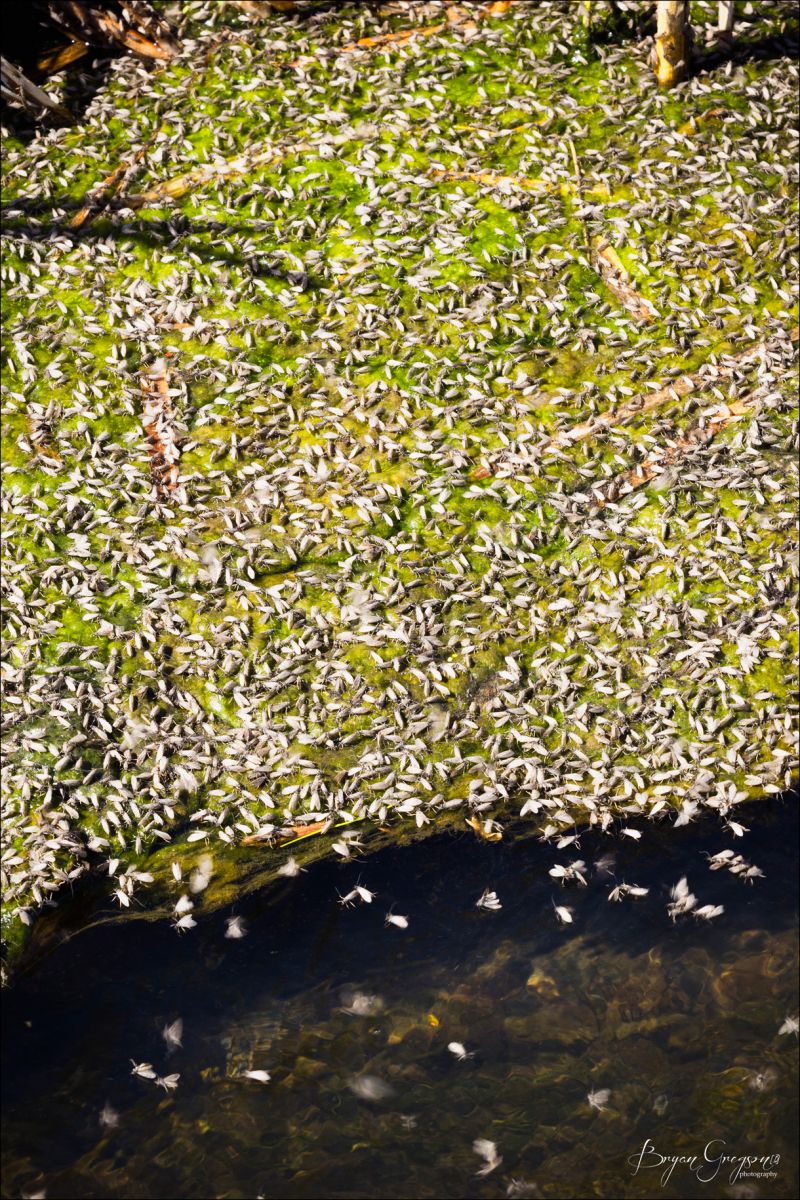 Late May through early July provides prime opportunity for surface action on this section of the river where the elevation is about 2,000 feet lower than at Island Park. Caddis of varying size and color are a staple throughout this period and they are usually joined by the giant Salmon Flies in early June. Pale Morning Duns start a list of mayflies that also include Flavs as well as the Green and Gray Drakes that almost guarantee the interest of big trout.

Access and size are limiting factors when fishing the lower Henry’s Fork. Flowing through mostly private land, the water volume in this section of the river is about double that which flows upstream in the area known as Last Chance, and it is sometimes even greater. Public access points with boat launching facilities are generally spaced several miles apart, which makes floating the most practical means of covering a significant amount of water. Drift fishing from a moving boat is a popular method when targeting trout tucked deeply beneath overhanging vegetation and out of view of most predatory attention. Anchoring in water too deep to wade but showing visible activity on the surface is especially productive during the Salmon Fly emergence or when the slightly smaller Golden Stones become available. Often, however, a boat provides convenient transportation to wadeable water away from congested areas where access is less restricted.

Morning and evening are favored times to find Henry’s Fork browns sipping mayfly spinners and caddis on broad flats or along shallow edges where concentration of these insects are strongest. Caution is a required element of wading any big water, and the lower Henry’s Fork is no exception to this rule.

Hatching activity usually begins to slow in early July as the weather heats up and flows start to fluctuate due to the demands of farm irrigation and hydroelectric generation. But because the big browns are still there, Henry’s Fork guides will continue to work nymphs and hoppers well into the summer months. And though the action seldom equals the earlier season, the potential for an exceptional fish is always present.

Fall brings a return to more stable flows as peak demands for a working river begin to subside. Baetis and Midge fishing become the order of the day when the weather cools, if it is dry fly action you are looking for. By October however, the interest of an adult brown shifts away from feeding toward a different mission just as critical to their survival. As the reproductive instinct begins to kick in, the personality of a big male brown takes on a combative attitude as it prepares for the annual ritual of autumn. And while the distance traveled is not nearly as far, the approach to fishing a fall run of brown trout resembles a technique applied to migrating steelhead. Methodical probing of likely holding water is an exercise in repetition as each section is thoroughly covered with a large streamer. Daily numbers are seldom high in comparison to fishing a good hatch, but the average size of the catch is generally much greater when you are fishing a 6 inch fly. While no Henry’s Fork brown I have ever hooked approaches the nearly 30 pound monster taken a few years back some in this water have pushed a 7 weight to its full capacity. Retaining optimism through a hundred or more long and unrewarded casts can be a test of one’s resolve, but the pull of the take and the weight of the heavy fish create a sensation that stands alone in fly fishing.

Because they differ in many aspects of behavior and appearance, brown trout are a proper companion species to rainbows which continue to dominate the population of trout in the lower Henry’s Fork. And though neither is valued above the other, I appreciate the elimination of travel as a requirement for enjoying the special pleasure that brown trout provide.