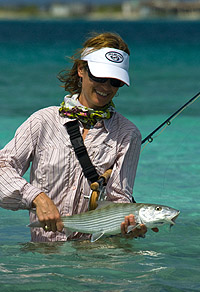 Archipelago Los Roques National Park is a coral reef that sits about 80 miles off the north coast of Venezuela. Over 350 islands, islets and cayes are arranged in an oval shape around a central lagoon. It is a stunning sight from an airplane.  I was pretty sure it was going to look even better while wading it's waters in search of bonefish.

I was fortunate enough to have been invited to fish this world class saltwater destination by Jim Klug and Chris Patterson of Confluence Films. Jim and Chris were beginning work on their second feature flyfishing movie and I was to be fishing in front of the camera with Jason Jagger, an exceptional angler who has spent countless days exploring Los Roques.  For those who have not seen Confluence Film's first feature, DRIFT, be sure to check it out!

I have to admit I had a couple of late night panic attacks at the thought of spending a night anywhere near Cararas, the murder capital of South America. Since the birth of my daughter Ella three years ago, exotic travel just isn't the same.  Was I being selfish to knowingly put myself in a potentially dangerous situation when there was someone that was more important than any fishing trip?!!! I know, you think I'm crazy...it's totally a mom thing. Having a kid really messes you up...but it's worth it. Rich talked me down and we flew to New Jersey to drop Ella off with her grandparents. Two days later, still filled with anxiety, I boarded a plane for Venezuela with Rich.

Before we get onto the good stuff, I have to tell you we landed at La Guaira at 10pm and spent one very comfortable, quiet and safe night just outside Caracas. I'm embarrassed to say that it was no big deal. The next morning we caught a 5am flight to Los Roques where we were greeted by our host Chris and our guides. It was a 5 minute walk (because there are no cars on the island) to the Posada Acualera, our home
for the week. The smell of stong coffee, homemade bread, bacon and eggs filled the open air dining room when we entered. Lush, exotic plants climbed the walls in search of the sun and a comfortable, warm humidity melted over my skin as we sat down to eat and discuss the fishing. I was already in heaven.

According to Chris, we could not have chosen a worse month than November to fish Los Roques. Tides were high (all day long), and it was the rainy season. I was nervous but happy to be there. Rods, guides and cameras ready, we headed for the boats. Five minutes into the ride the rain started but we got to the first flat and only had to wait a few more minutes before the sun came out. We jumped out of the boats. Chris wasn't lying. The water was indeed high, up to my armpits. Oh well. Rich and Jim went one way around a caye and my guide Jesus, Jason and I went the other. By the time we met on the other side 15 minutes later, Rich, Jim and myself were hooked up on bonefish and Jason was 100 yards behind me casting to two tailing permit. That is the way the next 4 days continued - intermittent rain and flat after flat of bonefish averaging over 4 lbs! We often walked along picturesque white sand beaches casting to groups of 2-5 bonefish slowly cruising in search of baitfish. Schools of jacks would often blitz the bait near the beach resulting in  fast and furious casting to frenzied fish. We also spent one day sight fishing to baby tarpon with Jose, the singing guide. Super fun. 3 or 4 jumps and the tarpon were tired out and in the boat. I really enjoyed fighting tarpon while being serenaded by Jose.

Then it was time to see the "rainy season", and did it ever rain. The fishing didn't really change, just our atti

re. Our guides were determined and professional. With their help, and a little help from the pelicans, some of the biggest fish of the trip (8-10 lbs.) were landed in the rain. As pelicans dive for bait, huge bonefish attack in search of stunned minnows (look closely at the pelican photo). It's fascinating and adds a fun challenge to the casting. Immediately after the pelican dives, you try to cast as close as possible to it without hooking it. Strip, strip and and more often than not you have a huge bonefish. I'll never forget Rich releasing a pelican he accidently hooked as 2 kids relentlessly teased him as by painting sand mustaches on their faces. When Rich shook his fist at the boys they came back at him with sand tears painted on their faces. Very cute.

On one particularly rainy day we were escorted to a pretty remote caye where we were instructed to fish and drink vodka for an hour. If you know me at all you know I did just that. As I fished with Jesus (and sipped vodka) I watched 2 or 3 guys hauling lobsters into a boat. They brought them ashore and 30 minutes later we sat under a tin roof  in pouring rain while feasting on the freshest lobster I will ever eat.

At the end of each day we returned to Acualera where Mimo, the incredible and all too charming chef from Sicily, fed us truly authentic Italian meals each night. The dining and lodging were the icing on the cake after a long day of fishing. The entire experience was perfect and surreal. Towards the end of our trip I was wishing to extend my stay...but someone was tugging at my heart to go home.

Many thanks to Jim Klug and Chris Patterson for inviting me to fish for them. And highest compliments to Chris Yrazabal and his guide staff at SightCast as well as Mimo and his crew at Acualera.

I can't wait to go back, perhaps as early as April. If you have any interest in joining me, email me.  -Millie Jo Paini