At thirty-five miles, it is not a long drive from winter home at St. Anthony to another home that Bonnie and I occupy for half of each year. However, the change in scenic view is constant and quite extreme along a north bound route that will see an increase in elevation of nearly two thousand feet.

At roughly one mile above sea level for approximately half of the journey, the view of the upper Snake River plain is one of open country where the Teton Ranger is clearly visible across perhaps forty miles of snow-covered terrain. However, crossing the Henry’s Fork just north of Ashton brings an immediate change to that characteristic.
For the next twenty miles, U.S. 20 climbs steadily and steeply through a tree lined corridor that leads to the crest of the Island Park caldera rim. Decent into the caldera is more gradual as the pine forest begins to thin and a glimpse of different peaks appears in the distance. By the second crossing of the Henry’s Fork at Osborne Bridge, the landscape opens abruptly into the vast meadow of Harriman State Park. It is at this point that the full impact of the scene penetrates my senses as I survey an image that never fails to reach the depths of my innermost feelings for this place.

The final two miles to Last Chance parallel the eastern boundary of the park where snow nearly obscures the rail fence with roughly double the depth that covered my starting point. From the flats of the park to Thurman Ridge and beyond to the looming Centennial Range, it is stark white that rules the panorama.
With my last visit to Last Chance occurring well before the holidays, there were several reasons for making the late January drive. Checking on our vacant cabin was certainly on the list but equal priority was given to the river. Driving the frontage downstream, I surveyed Last Chance Run, which at this point in the year is largely owned by swans, geese, and ducks. In the fifteen-degree temperature there was no surprise in the absence of rising trout, but I spent nearly thirty minutes watching for noses anyway.
The final and most important stop was at the TroutHunter Lodge, where I looked forward to catching up with Rich and Jon for an update and a beer. 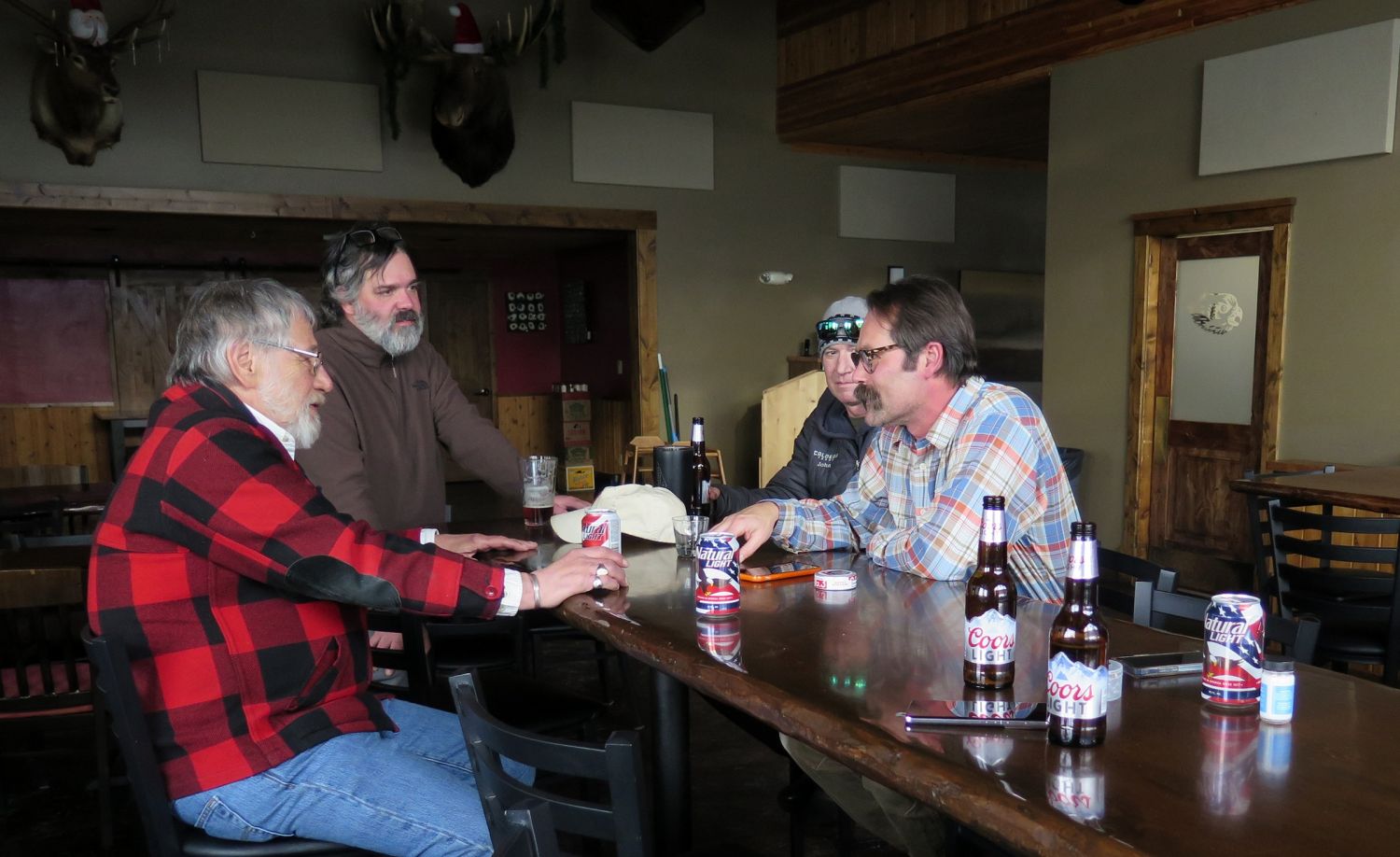 As expected, the conversation was spirited as we exchanged reports on family, fishing, and friends. Though politics take a back seat, issues pertaining to the river are not ignored. Local matters fill a larger portion of the discussion with news from the Island Park business community being of particular interest.
With the winter sun creeping low over Bishop Mountain and mist beginning to rise from the Henry’s Fork close by, a parade of snowmobiles come into view looking south. It is a common sight at this point of the year with one exception. Though somewhat obscured by the incoming fog, a much larger vehicle joins the convoy that will stop for late afternoon cocktails at the TroutHunter Bar and Grill.
I had heard of the most recent addition to the Island Park business community but this was my first glimpse of the snow coach that dwarfed the smaller machines. Moment later I was introduced to the personable owner of Caldera Tours. A short visit with John Layshock brought quick understanding of community approval of the new enterprise. 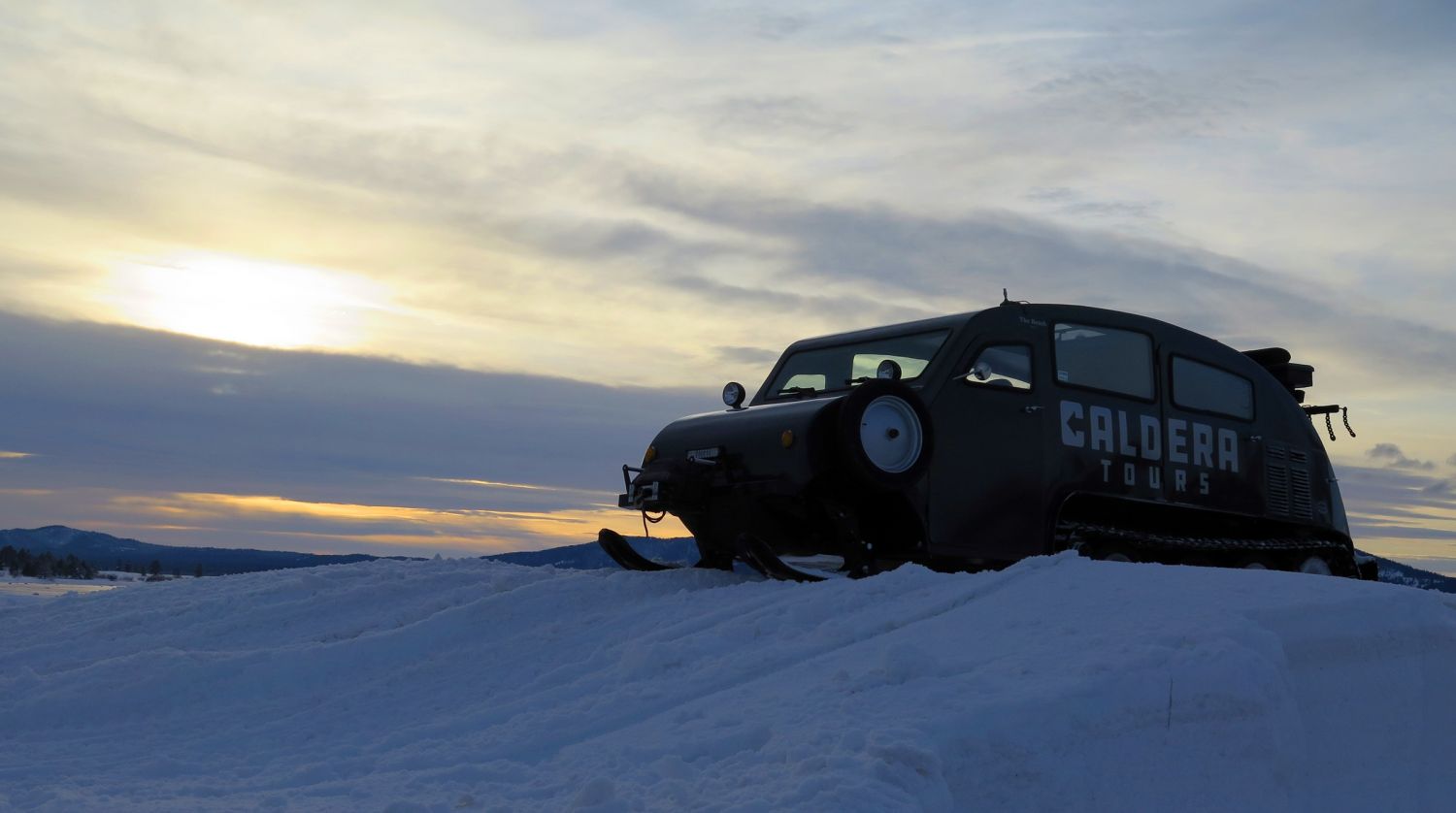 As the restaurant began to fill and with sunset rapidly approaching, I left Island Park with a revived spirit that invariably emerges from time spent with those special friends.
In most years, late February and its expanding hours of daylight will find me again on the river along Last Chance Run. And though winter will remain for another month or more, it is time to look forward to another season when fly rods again take their rightful place on the Henry’s Fork.