While the Henry’s Fork offers plenty of spring fishing opportunities in the form of midges, baetis, caddis, and rithrogenia, it is the annual emergence of the Pteronarcys californica, aka the giant salmonfly, which occupies the hopes and dreams of local anglers through the 6 or so long, dark, snowy and cold winter months of southeast Idaho. Visions of big fish rising to fluffy, size 4 dry flies ease the pain of even a -20 night.

Of course, in 2020, the harshness of the winter snow paled in comparison to dealing with an unprecedented-in-our-lifetimes global pandemic and the stay at home orders which came with Covid-19. Perhaps more than ever before, the anticipation of the salmonfly hatch offers the hope of a return to normalcy. Through all that 2020 has thrown at us so far, the river will still run, the bugs will hatch, and the fish will rise.

Salmonflies emerge after living in the river as nymphs for three to four years, growing to a size of several inches long. As spring runoff flows begin to subside, mature salmonfly nymphs instinctively know that their time has come. They leave the relative safety of the porous lava rock on the river bottom and drift and crawl their way to the riverbank. Along the way, many nymphs are sure to become trout food. Those that survive their migration will crawl out along streamside vegetation, branches, lava rock cliffs and boulders, and of course bridge stanchions, where they will dry their exoskeletons, split them open, and wiggle their way out as winged adults. At a size of several inches long, these freshly emerged salmonflies cannot immediately fly. They will retreat to the streamside vegetation to allow their wings to dry and to find a mate. Several days later, after having mated in the bushes, the female salmonfly will embark on an egg-laying flight over the river. Some insects will release their pea-sized, black egg sacks from several feet above the river’s surface. Others will drop directly onto the surface. Once they hit the water, females discharge their egg-sacks immediately and then begin a literal life or death struggle to return to the riverbank. Whereas a female goldenstone will fold its wings down along its back and desperately run its way back to the bank after laying its eggs, a salmonfly will beat its wings frantically in an attempt to either take off and fly back to the riverbank, or to act as a sort of mini motor to assist them on their journey. It is the egg laying flight of the female salmonfly, on a warm and dry overcast day, that offers anglers the dry fly opportunities of their dreams. Trout key on, and feed with gluttonous fury upon, the fluttering salmonfly females trying to ride the river’s waves back to the safety of the riverbank. Of course, many insects succumb to the waves of the river and become fish food. To find success on the Henry’s Fork, anglers must have patterns representing both fluttering stones and drowned stones, as specific trout may be keyed on one or the other. 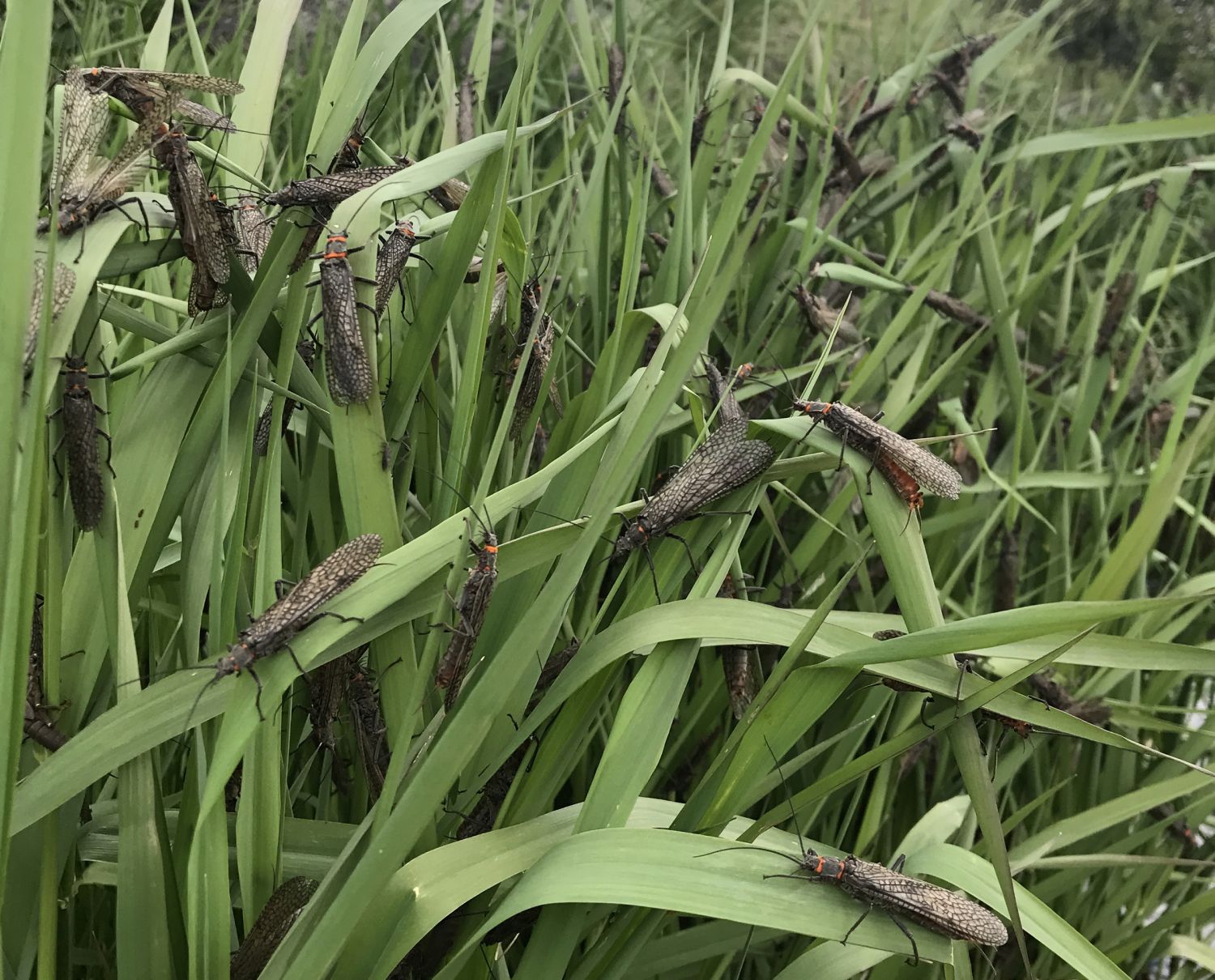 While big fish are caught on big dry flies during each annual salmonfly emergence, there is a flip side to the salmonfly dry fly fantasy. That downside is the unfortunate reality of the unpredictability of spring weather in southeastern Idaho at elevations over 5000’. In mid to late May, when salmonflies hatch, it could rain for days on end. There could be a hailstorm. It could snow. It could be sunny and 70 degrees. It could snow and be in the 20’s. Or it could do all those things in the same day, or even the same hour. As an insect, the salmonfly is so large that it takes time to dry its wings enough for flight. If the wings cannot be dried enough for flight, the proverbial show will go on, but it will all take place immediately along the river’s edge. Fertilized females with wet wings and egg sacks which need to be deposited, will drop from streamside vegetation and overhanging branches, and release their eggs and crawl back to the bank. All within a few feet, if not inches, of the riverbank. Precise reach casts close to cover that land with a plop and do not drag are the rule. Quite often a lazy cast and mend from a passing driftboat will pull an angler’s fly right out of the feeding lane. Angling pressure and catch and release practices have made fish wary to splashy driftboats and poorly presented flies.

While it is never uncommon to hear an angler lamenting their day on the Henry’s Fork at a boat ramp, it seems to happen even more frequently during the salmonfly hatch. Do the fish eat them? Absolutely. Are they easy? Rarely. Is it worth the challenge? Every damn time. The Henry’s Fork is usually the first river in the area to have clear water, and as such it draws a crowd from miles around. As a result, the fish become well educated and demand an angler’s best effort. The rewards can be the stuff that dreams are made of. 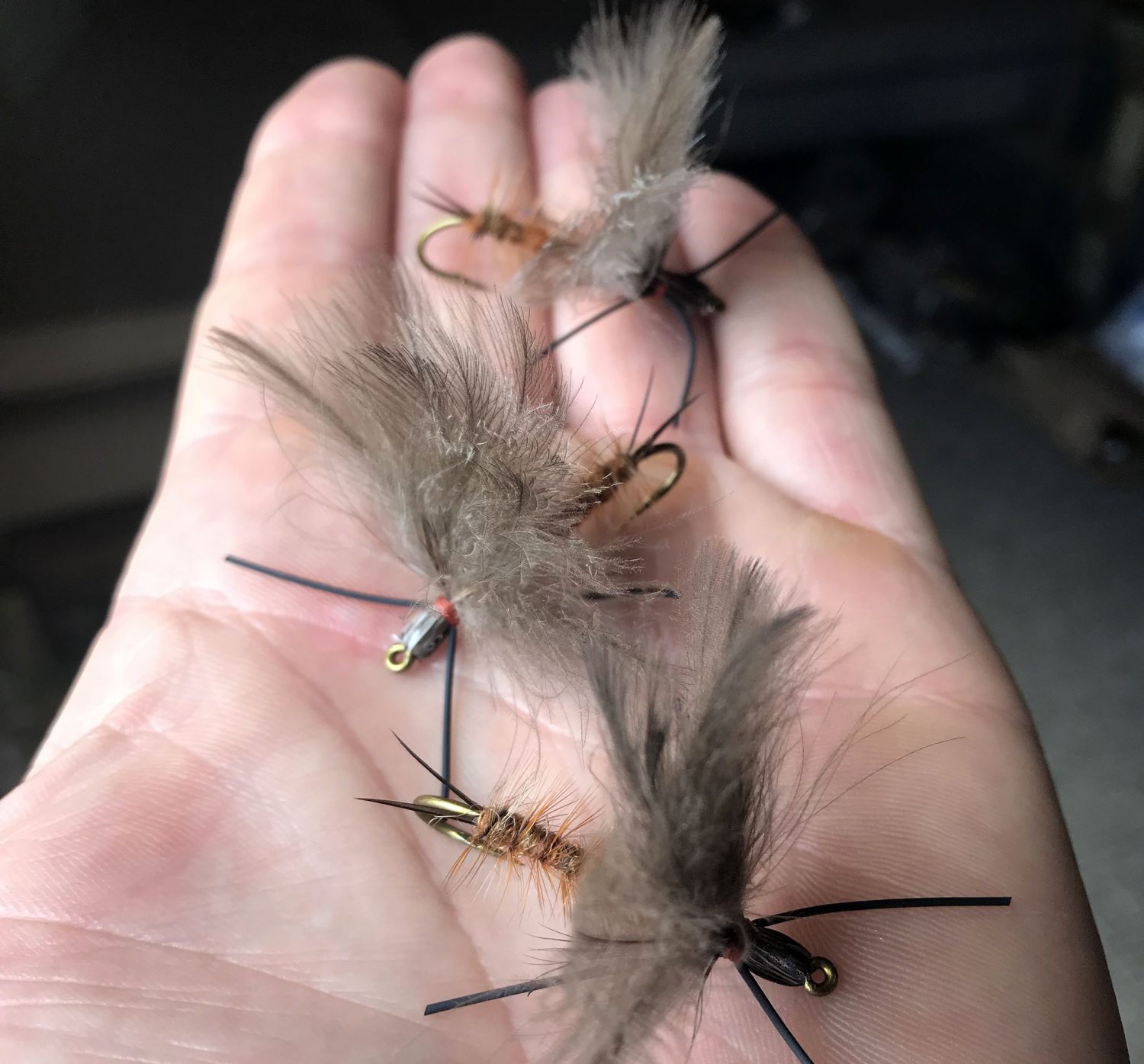 Like myself many years ago, my wife, Erin, is one of the many anglers whose fly fishing journey truly began with experiencing a salmonfly emergence. While always enjoying the outdoors as a hiker, biker, and runner, being married to a fly fishing guide means that her time on the water is limited when the dry fly fishing really heats up. However, several years ago, I had clients visit in mid-May for four days of fishing in an attempt to roll the dice on the weather and time their salmonfly experience just right. During their visit, we caught several memorable fish, and faced with a rising barometer, they even added on a half day on their return home travel day. With that in mind, I told my wife Erin to clear her afternoon slate so that we might spend some rare time on the water together after my guide trip. The next day, my clients had to be at the ramp by noon, to be in Idaho Falls by 1:30 for a flight. Erin met me at the boat ramp shortly thereafter, and we were off on her first salmonfly adventure.

While never an avid angler, Erin has always jumped at the limited opportunities we have to fish together. I try to put her on fish, and she listens and processes information well, and does her best to translate my instructions into her cast. Like our marriage, our fishing relationship has taken time to develop and has evolved over our years together into something that works really well for us. Most of the time, she humbly gets ‘em pretty good, all while having a damn good time in the process. On this particular day, I had barely launched my boat when I saw a nice fish rise out of the corner of my eye. I rowed to the bank downstream of the fish, slid out of my RO skiff, spun it around, and dragged Erin into a good casting position. From her seated position in the bow of my skiff she nailed the cast, the fish ate, and it was on. Erin was tight to her dream fish, her largest brown trout to date, well over the coveted 20 inch mark. The fish ran into the current and downstream. I flipped the boat around to face downstream and to allow Erin to let the fish run. As I clambered into the boat, I yelled at Erin to “let it run,” grabbed the oars, and pushed after the fleeing fish.

“Reel, reel, reel!” I instructed Erin as I chased the fish downriver.

“Oh shit, it’s going into that beaver dam!” Erin desperately pleaded with the fish to turn. She leaned into her 6 weight B3x.

POP!! The 3x fluorocarbon tippet vs. the brown trout vs. the beaver dam finally succumbed.

The fish won. There was loud swearing. And groaning and lamenting from onlookers launching their boats. She was sad. And mad. Really mad.

And a dry fly TroutHunter was born.

Fast forward a few more years to 2019. This time, a late cancellation opened up an opportunity for Erin. Having been haunted for years by her proverbial “one that got away,” Erin had wanted a shot at redemption since that day. Her questions about my guide trips became more frequent and more poignant. “Did you get ‘em today?” “Where were you?” “Any big ones?” “What did it eat?” “Show me the pictures!”

We returned to the ‘scene of the crime’ and launched the boat. I crossed the river and slid out of the boat. Together, we perused the same water we had fished years earlier. There were nymphal shucks on rocks, and adult salmonflies in the bushes. Caddis were bouncing around the streamside vegetation in the early afternoon. The sun was high and there was not a sign of a fish. I didn’t dare mention what had transpired here a few short years ago.

“Cast a couple times by that rock right there,” I suggested to my better half, pointing to the rock I hoped she’d target. She made a cast downstream of the rock, and retrieved the line as the current brought it back to her.

“No, try upstream and outside of the rock towards the middle of the river by about 3 feet. Don’t put it in the same place.”

Erin dropped her next cast just above and to the outside of the rock. Out of seemingly nowhere a large brown trout slowly and methodically came to the fly, stealthily yet deliberately ate, and with a swirl disappeared again. Erin gasped……and set. The pause of her breath being taken away before she set the hook made her timing perfect. The line came tight and the heavy fish ran into the current and downstream. Line screamed from the Hatch reel. I jumped into the boat and got on the oars. Erin reeled like hell to catch up as I pushed after the fish. The fish fought as large browns often do, bulldogs hunkered to the bottom. I rowed hard and got downstream of the fish and then drifted with it, using the boat to help Erin fight it. She worked its tail to the surface, though still the head was deep.

“Lift it up, you got it!” I recall encouraging Erin, probably at a level that bordered on yelling due to the sheer excitement of the moment.

With a final heave, Erin grabbed the reel and lifted. The 6 weight bent deeply. The fish rolled over and I slid the net beneath a trophy Henry’s Fork brown trout. Careful to keep the fish submerged, I handed the net to Erin so that we could row to the bank to take a couple pictures to capture the memory.

As she took the net from me, she was trembling. 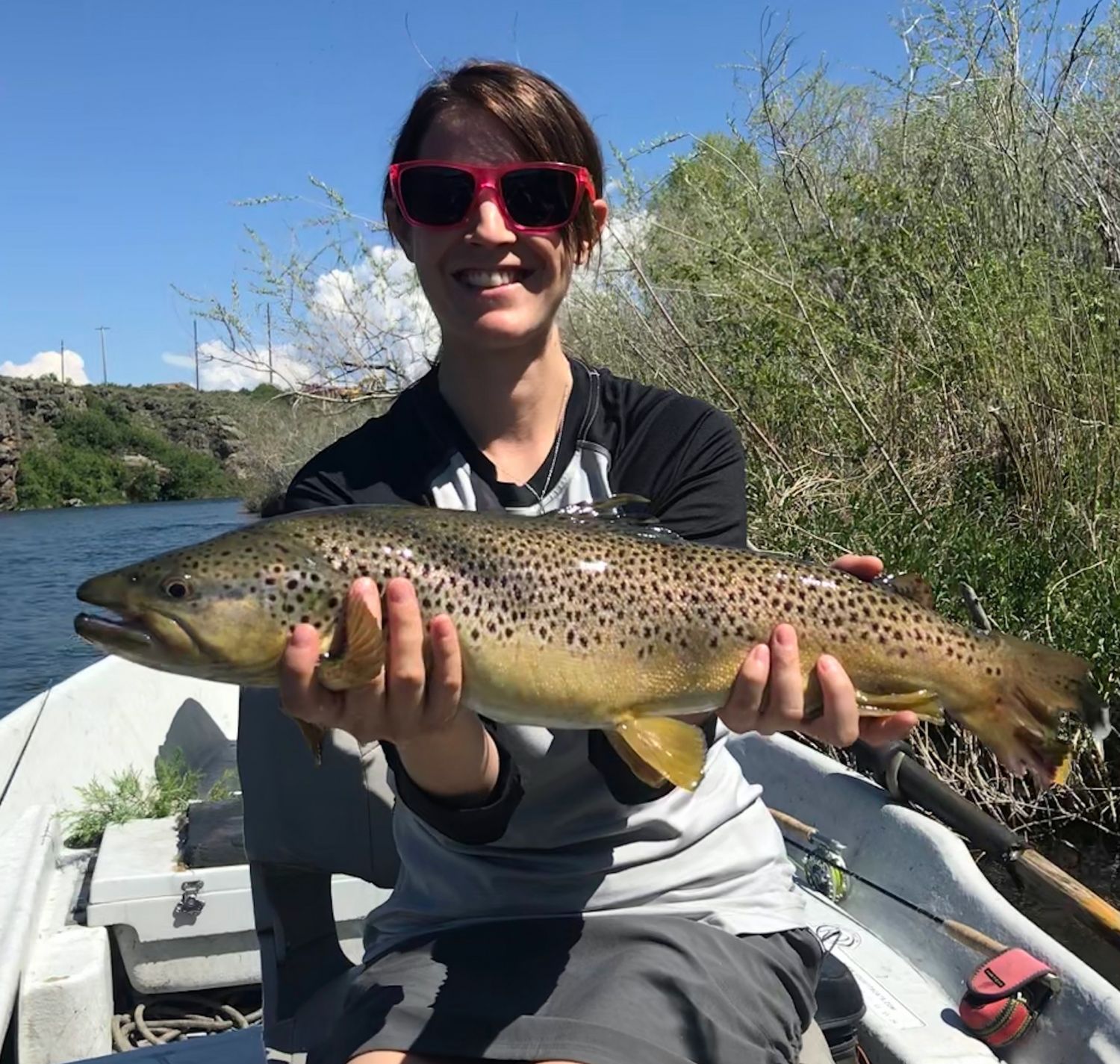