The other night my wife and I decided to try a little evening fishing at one of our favorite spots in the Last Chance area. We arrived at the river around 7 pm and were surprised that no one else was there. At first, there appeared that nothing was happening on the water, possible explaining why no one else was there, in spite of the presence of hundreds, if not thousands, of caddis hovering over the vegetation along the banks. As we looked closer we could see there were a number of small fish sipping something off the surface. As we watched the water intently, trying to identify what the fish were feeding on, something caught my eye a little farther out in the river. That something turned out to be a very large fish aggressively feeding on what I believed to be caddis based on its feeding behavior. I selected one of Rene’s Bubbleback Caddis patterns from my box, tied it on my 5X tippet, and quietly slipped into the water and slowly made my way into a position. On my very first cast, half-way thru my drift, I heard my wife yell, He Ate It! She yelled again, He Ate It! I finally lifted the rod tip to set the hook and felt nothing. From her position on the bank I could hear her scolding me. That fish took your fly, chewed on it, decided it was not the real thing, then spit it out. What the hell were you thinking all that time? Why didn’t you set the hook when I said He Ate It? Well, my only explanation is that there are times in a marriage when selective hearing loss is a good thing and there are times when it is not. I guess this was one of those times when it wasn’t.
Box Canyon: The “Box” continues to produce solid fishing. It’s mostly a nymphing game dead drifting a couple of nymphs under an indicator. I like using a size 8 coffee and black beadhead rubber leg with either a size 16 or 18 brown Zebra Midge or a Crackback nymph as my dropper. There are still golden stones present in the “Box” and I have had decent reports from anglers fishing dry/dropped rigs using their favorite adult golden stone imitation on top and dropping a small (size 16 or 18) beadhead nymph underneath. There has also been some match the hatch dry fly fishing available down thru the Last Chance Run due to good hatches of PMD’s and caddis. 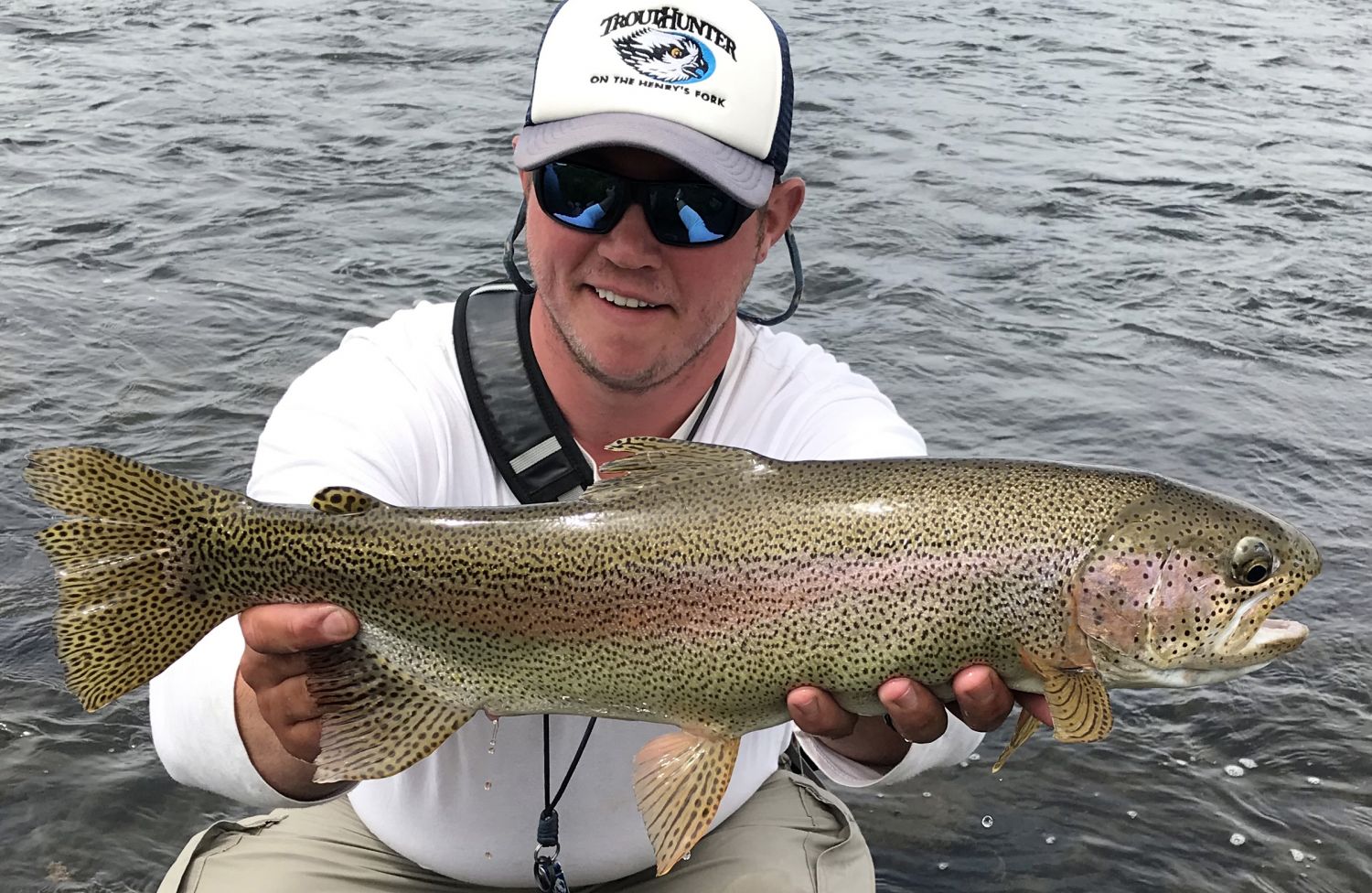 Last Chance: This section of the upper Henry’s Fork has been producing very good fishing courtesy of some strong hatches of PMD’s, Green Drakes and caddis. You can find fish working PMD spinner falls early in the morning, hatching PMD’s later in the morning and continuing into the early afternoon and spinner falls again in the early evening. The best caddis fishing has been in the evening from about seven o’clock until dark. However, the Green Drake hatch, which has been coming off sometime between 11:30 am and 12:30 pm and lasting for about an hour to an hour and a half, has been producing the most exciting fishing. The presence of these big bugs on the water has brought some real big rainbows to the surface over the past four or five days.

The Railroad Ranch: Fishing from the Log Jam all the way down to the Wood Road has been some of the best fishing we have seen in several years on this section of the Henry’s Fork. Most “Ranch” regulars attribute the better fishing this year to much better hatches than we have experienced over the past couple of years. We have seen good hatches of PMD’s, Green Drake’s and caddis. The Brown Drake’s have not shown up yet but we expect to see them any day.
Wood Road: This section of the river has been producing very good fishing due to excellent hatches of PMD’s and caddis. Fishing is best from early morning until about three in the afternoon. There is a little down time late in the afternoon before things pick up again around six or seven until dark.
Warm River to Ashton: As usual this section of the river is producing fun fishing for just about everyone who fishes down here. You can expect to catch fish on dry flies, nymphs and streamers. You may not catch the biggest fish in the Henry’s Fork on this stretch but you will probably catch the most fish.

Ora to Chester/Chester to the Fun Farm: These two sections of the river have been fishing lights out for several weeks now. There have been and continue to be excellent hatches of caddis, PMD’s, Green Drake’s, Flav’s, Gray Drakes, Yellow Sallies and Golden Stones. All of these hatching insects have the fish in a feeding frenzy.