It is an exciting day that begins early at the TroutHunter fly shop. Normally, I am there as just another fisherman who, either alone or with my family or friends, would be fishing independently. However, at eight a.m. I have joined a dozen or so expectant anglers in preparing for a day of guided fishing.

Invited by Kevin Despain to share a seat for a float with guide, Zach Wheeler, I absorb the elevated anticipation of any client about to embark on a day with one of the true professionals of the Henry’s Fork.

A big breakfast in the Bar and Grill is followed by perhaps twenty minutes of socializing with other guests while the guides attend to the details required to get things underway. It is a bustling time of high energy as boats are hitched, tackle is loaded, and the coolers are stocked.
The drive is not far to Osborne Bridge where the float will begin and we are on the water within thirty minutes of leaving Last Chance. It is a stretch of river that I have fished for six decades and guided on for several years, but it has a different feel as we pass beneath the old stock bridge. I think this is because I have never grown accustomed to placing a day of fishing almost exclusively in the hands of someone else. From start to finish, practically every detail that I would normally handle myself will be covered by the guide, and there is no handicap in this concession with the right man on the oars.Through the lens of one who does not need a guide on this iconic river I will enjoy and appreciate this day with a person whose resume is founded upon knowledge of all things trout.
Though the water is high the current is slow through the three miles we will be floating. Insect activity and rising trout are sparse through the first half of that distance where the water runs deep and most casting is done from the drift boat.
With eyes in deep wide angle mode, Zach searches hidden places close to the bank where secretive trout are generally missed by the casual observer. We share this stretch with two other guide boats, and there is no conflict with the commercial competition. Wading anglers are given an especially wide berth by a profession where courtesy and river manners rise above all other considerations.At a distance of nearly one hundred yards, I’m not sure I would have spotted the first target tucked back in the shadow of overhanging vegetation, but Zach seemed to know the fish would be there. With patience and stealth, he maneuvered the boat into casting range then eased the anchor into holding position. 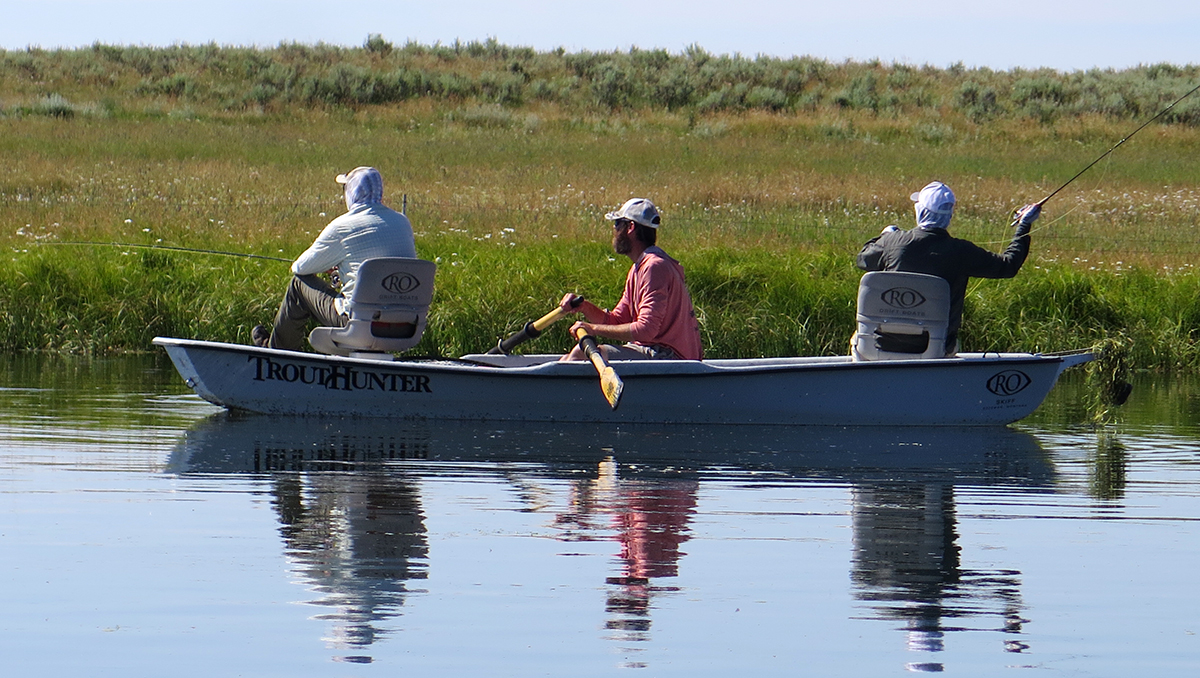 Kevin’s forty foot cast was spot on and the little beetle disappeared with only a three foot drift. Despite losing the trout it was a good start to a day that we knew would be a test.

The game changed between Big Osborne Spring and the gravel bar when a light emergence of Pale Morning Duns started at around noon. Most who know the incredible difficulty of successfully engaging with the defiant behavior of big rainbows focused exclusively on emerging PMD nymphs will walk away from the most demanding fishing the river has to offer, but not this guide.
Three hours later with one fish hooked and none landed, we finally took a break while Kevin provided a very suitable consolation prize in the form of delectable steak tacos prepared right in the boat. 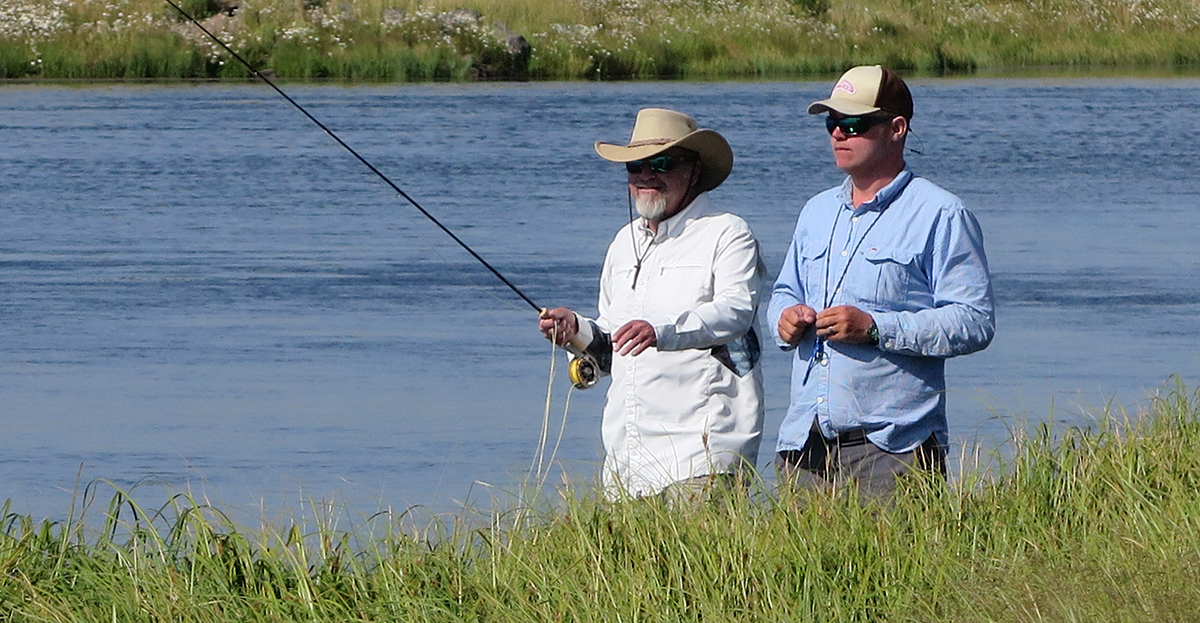 Another session a mile downstream took us to nearly six p.m. and produced basically the same results as the earlier round. We ended the days fishing to accommodate seven p.m. dinner reservations and left the water with the trout still aggressively chasing the little dark nymphs and a tally of zero fish in the net.
Through eight hours on the water there was never a dull moment, and never a time when enthusiasm for the next cast was not present. With big trout in view for at least half that period, there was no shortage of opportunity and casting fatigue was the sole source of any weariness.
Our guide had gone through every tool in his box and every trick in his bag in a determined effort to overcome a degree of trout resistance that cannot rise any higher. In short, he had done his job for two anglers who had willingly put aside easier fishing and bigger numbers in favor of taking on a situation where the trout win far more often than they lose.
With stimulating company, fine weather, and enough action to more than satisfy my expectations, there was no shame in the outcome. It was a great day to be on the Henry’s Fork.