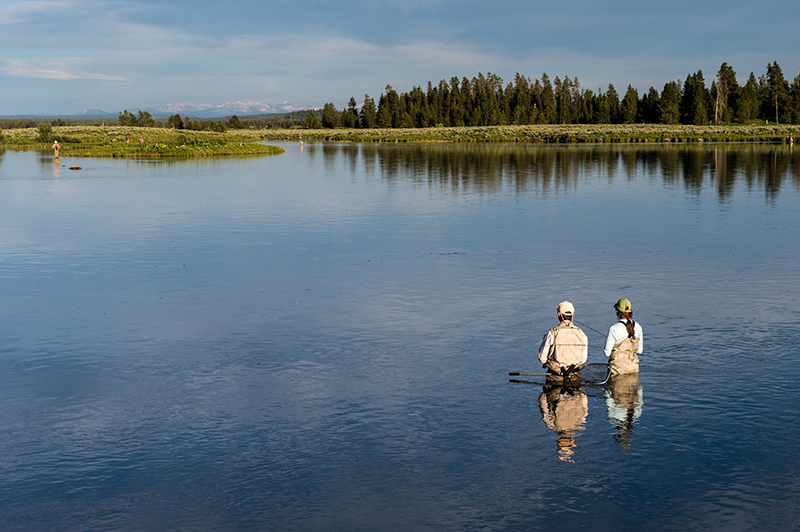 I am writing this report just a half hour after coming home from a very interesting morning on the Railroad Ranch section of the Henry’s Fork.  I arrived at the Log Jam parking lot at 7:30 AM, got geared up, and walked downstream until I found a spot that looked promising.  I pretty much had the place to myself except for a couple of pesky pelicans and a few gulls.  Things were quiet until around 8:30 when I noticed an energetic juvenile rainbow aggressively feeding along the edge of a current line created by a mid-stream boulder.  It wasn’t long before he was joined by a more mature specimen that got me off my butt and into action.  There were a few Flav spinners on the water and they were joined by an occasional Green Drake adult.  I selected my favorite Flav spinner pattern from my box and began the process of trying to entice that bad boy into taking what looked to me to be a perfect imitation of a Flav spinner. After a short while it became apparent that what appeared to me to be a perfect imitation was not so for that fish.  I changed to a Green Drake imitation but that also proved fruitless. Before too long I noticed that I was surrounded by a number of large rainbows actively feeding on a variety of insects. There were the Flavs, the Green Drakes, caddis of a couple of varieties, and PMD’s in every stage of development (drifting nymphs, emergers, stillborns, cripples, adults and spinners). I was in the middle of a classic compound/complex hatch. What made the whole event very interesting or extremely frustrating depending on your point of view was that every fish in sight was keying in on something different.  One fish might be keyed in on a Flav spinner another one on a PMD spinner another on a PMD adult and another on a PMD cripple or stillborn. Now I would like to report that I systematically caught every one of those fish after figuring out exactly what they were feeding on.  After all, I work in the fly shop and people come to me for sage advice on all matters pertaining to fly fishing.  I am expected to have all the answers. However, like George Washington, I cannot tell a lie. Those fish gave me a royal ass kicking. I left the river licking some pretty serious wounds. But, you know what, I can’t wait to get out there and do it again.  See you on the river!
Box Canyon:  It’s hard to give a good assessment of the fishing in the Box right now.  There has been a lot of non-fishing recreational floating in the canyon over this holiday weekend and this has disrupted the fishing. A few of our guides have put in very early and just floated through before the rubber duckies arrive.  They have reported decent success with the usual suspects. Rubber legs and Zebra Midges fished under an indicator. There continues to be a little dry fly fishing with adult Golden Stone imitations.
The Ranch:  From my perspective the Ranch is fishing very well.  There are a number of different insects hatching out there providing the angler with a host of opportunities to test his skills under a variety of situations. Right now the Ranch fisherman will find Flavs, Green Drakes, Brown Drakes, Callibaetis, PMDs, caddis, Yellow Sallies and beetles and ants all on the water at one time or another or all on the water at the same time.  This plethora of hatching insects can be both a blessing and a curse.  For myself this morning it was a curse. I would have liked to see just one or two insects on the water instead so much activity made it very challenging to almost impossible to figure out what exactly was going on. But, hey, that’s what makes this place so special.  You just can’t walk out there with a couple of nymphs that imitate the immature stage of a mepps spinner, fish them blindly under a bobber, and expect to fool these selective rainbows.  Like I said, see you on the river!
Warm River to Ashton:  Like the Box Canyon this section of the river has seen a great deal of holiday use   from the rubber duckie crowd.  However, the fishing has held up better here than it has in the Box.  We have had reports of decent catches using dries, nymphs and streamers.
Ashton to Saint Anthony:  Fishing on this section of the river has held up better than expected due to stable water flows. There are caddis, Yellow Sallies, PMDs, a few Golden Stones and Gray Drakes all hatching down on this part of the river.  Because of the high afternoon temperatures we are expecting over the next few days I would suggest fishing early and late if you are planning on fishing this area.
Madison River, Montana: The Madison has been fishing very well over the past couple of weeks. The Salmon fly hatch has been going on and this has got the fish on the feed.  Besides the Salmon flies there are Golden Stones, caddis and PMDs. Some of our favorite patterns for the Madison at this time of year are the Water Walkers (Salmon Fly and Golden Stone), Tubby Salmon Fly, Tubby Golden, Drowned Golden, PMD Sparkle Duns and X and EZ Caddis.