On a lovely afternoon last June, I sat on the grassy bank of the lower Henry’s Fork of the Snake River near Ashton, Idaho waiting for what I hoped would be a fine evening of fishing.  My son Scott and his wife, Nikki, had already waded out into the river 50 yards upstream, but I was in no hurry.  After awhile, my old fishing buddy Cam Cantwell came walking down the gravel farm road and joined me on the bank.
"I was hoping we might run into you,” I said.  He and I have fly-fished together in Idaho, Tennessee, North Carolina and elsewhere for many years, and this stretch of the river is one of our favorite spots.
"Well, I wasn’t too happy to see fishermen already here until I realized it was you guys,” he chuckled.  "Maybe we’ll discourage other competition while giving each other plenty of room.”
There were already a few trout rising – mostly smallish fish – and although both of us usually wait until later knowing that’s when the bigger fish show up, Cam decided to walk upstream and give them a try. 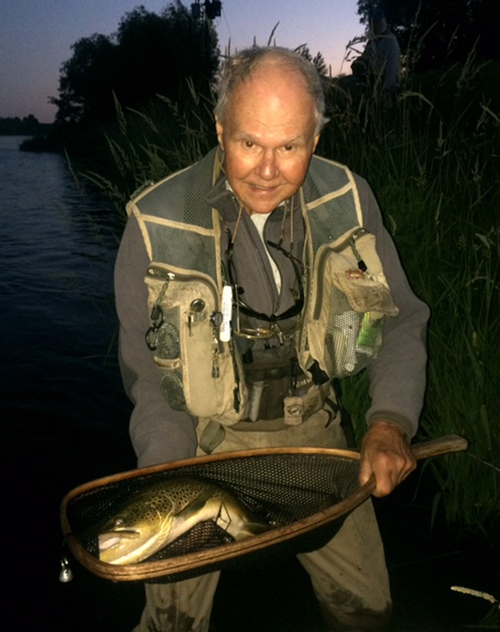 It was already after 8:30, but it wouldn’t be dark until around 10, and even then by looking at the silvery sheen of water against the dying light, we would be able to see a trout rise.  The cap I was wearing had both a magnifying lens and a small light.  If you catch a trout at dark, the light is a big help in removing the fly and releasing the fish.
An hour passed, maybe longer, and then I saw what I had been waiting for.  Thirty feet upstream, barely a foot off the bank, I thought I saw a bulge.  A few moments later, I saw it again -- a bulge in a ring of disturbed water.  I eased into the edge of the river and watched.  I figured the trout –- likely a brown – was probably sipping spinners (the mature form of a mayfly that mates, lays its eggs, then falls spent to the surface to die).  I had already tied on a fly, anticipating that these spinners would be flavs (Drunella flavilinea; sometimes also called baby green drakes).
I couldn’t see my fly on the water, but the fish ate something where I judged it to be, and when I raised the rod tip, it was there.  I played it carefully, glad that it didn’t choose to make a long run across the wide river or downstream in the faster current.   By that time, Scott, Nikki and Cam had walked back to watch – it was nearly full dark by then anyway.
That trout did not wish to be landed – no surprise --and as I tried to slide the net under it, my rod brushed against my cap and flipped it into the river behind me.  I got the trout in the net, but without my cap-light, I couldn’t see well enough to unhook the fly without possibly harming the trout.  I snipped the leader as close to the fly as I could and held the trout in the net until I knew it was okay, then turned it loose.
The water was not swift next to the bank where my cap had fallen, and it was also shallow, but we couldn’t find it.  After awhile, we gave up.
"Oh well,” I said.  "It died a noble death and, after all, I have plenty of others.  Let’s go get supper.” 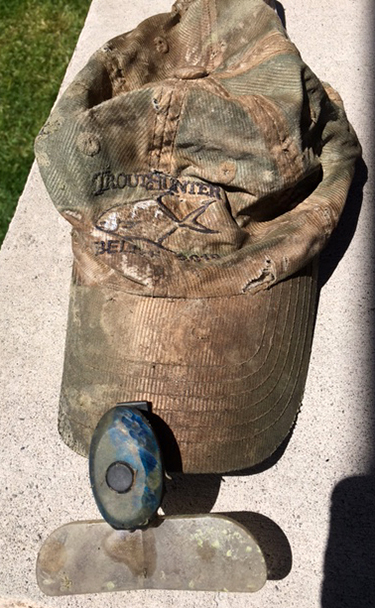 Over the winter, the snowpack was heavier than normal – several feet deep at least -- and there was also plenty of high water this spring.  The cap was mostly forgotten – just another casualty of fly fishing (one of my old cell phones is also somewhere on the bottom of this river – a price I rightly paid for carrying it fishing in the first place).
Then, in early June of this year, Rich Paini who co-owns TroutHunter lodge, restaurant and guide service with Jon Stiehl 20 miles upstream in Last Chance, sent me a photo of that cap with this message: "Is this yours?”
Turns out TroutHunter guide Jon Lewis found the cap on a float trip this spring.  The cap has the TroutHunter logo, a patch showing a permit, and "Belize – 2007.”  That year, Rich had special ordered a few caps to give those of us who fished Turneffe, Belize with he and his wife, Millie.  Jon brought the cap to Rich.
So, as I write this on the eve of this year’s annual trip to The Henry’s Fork, I have a muddy, much-battered cap waiting for me.  The consensus is that it’s just getting broken in.
Forty years ago, when Scott was about 10-years old, he and I were fishing for wild trout in a remote stretch of Lost Cove Creek in western North Carolina.  I lost a cap that day, too, and a year later I found it half-buried in muck.
It’s not unlikely that someday, my ashes (or ash) may also wind up wintering in these waters.