In late January, anyone driving into Last chance, Idaho from points south will encounter a different world than what most folks who visit this community are accustomed to finding.

Rather than fly fishing, the main driving force for both recreation and commerce is snowmobiling and there is no questioning this seasonal adjustment when you are greeted by snow accumulation that is growing toward the five foot mark. 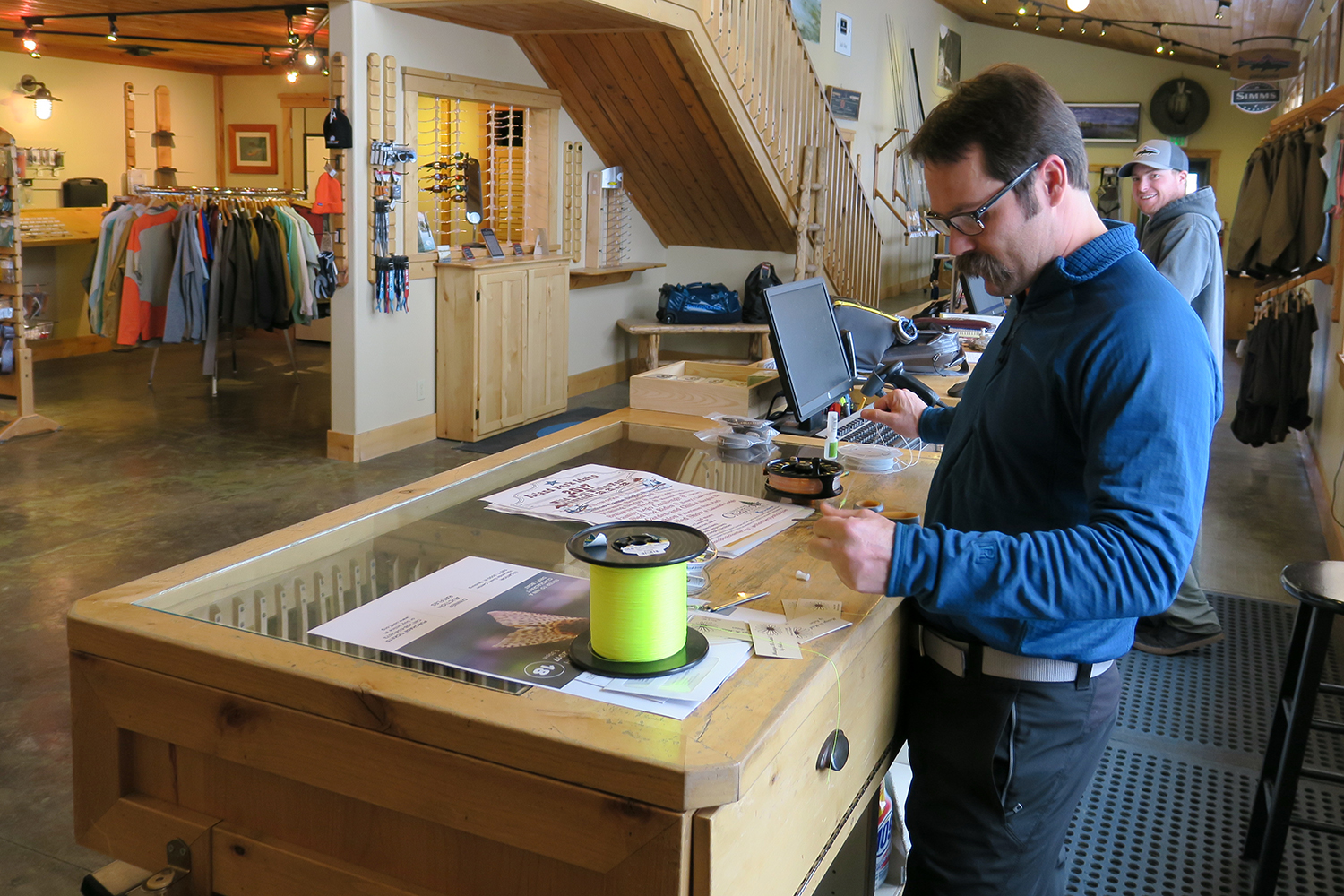 It was this way last Saturday as I turned from U.S. Highway 20 into

TroutHunter Lodge shortly past noon. Waiting for a half dozen over the snow speed wagons to cross the entry into the parking area, I could see that wheeled vehicles were outnumbered significantly by the high power sleds.

Days of bustling activity in the fly shop were a distant memory as I entered to find only TroutHunter partner, Rich Paini at the counter. With no customers as a distraction, I found him working diligently over a half dozen fly reels that could have rivaled a small dinner plate in their diameter.

With February close at hand, history told me that Rich was putting the finishing touches on the great cranking mechanisms in advance of a string of salt water trips that would occupy most of his time until well into March.

Within about ten minutes we were joined by another partner, Jon Stiehl and Tom Watkins, the TroutHunter Wholesale Manager. We chatted for about twenty minutes as Rich completed his task then left the deserted fly shop for a beer and more conversation. 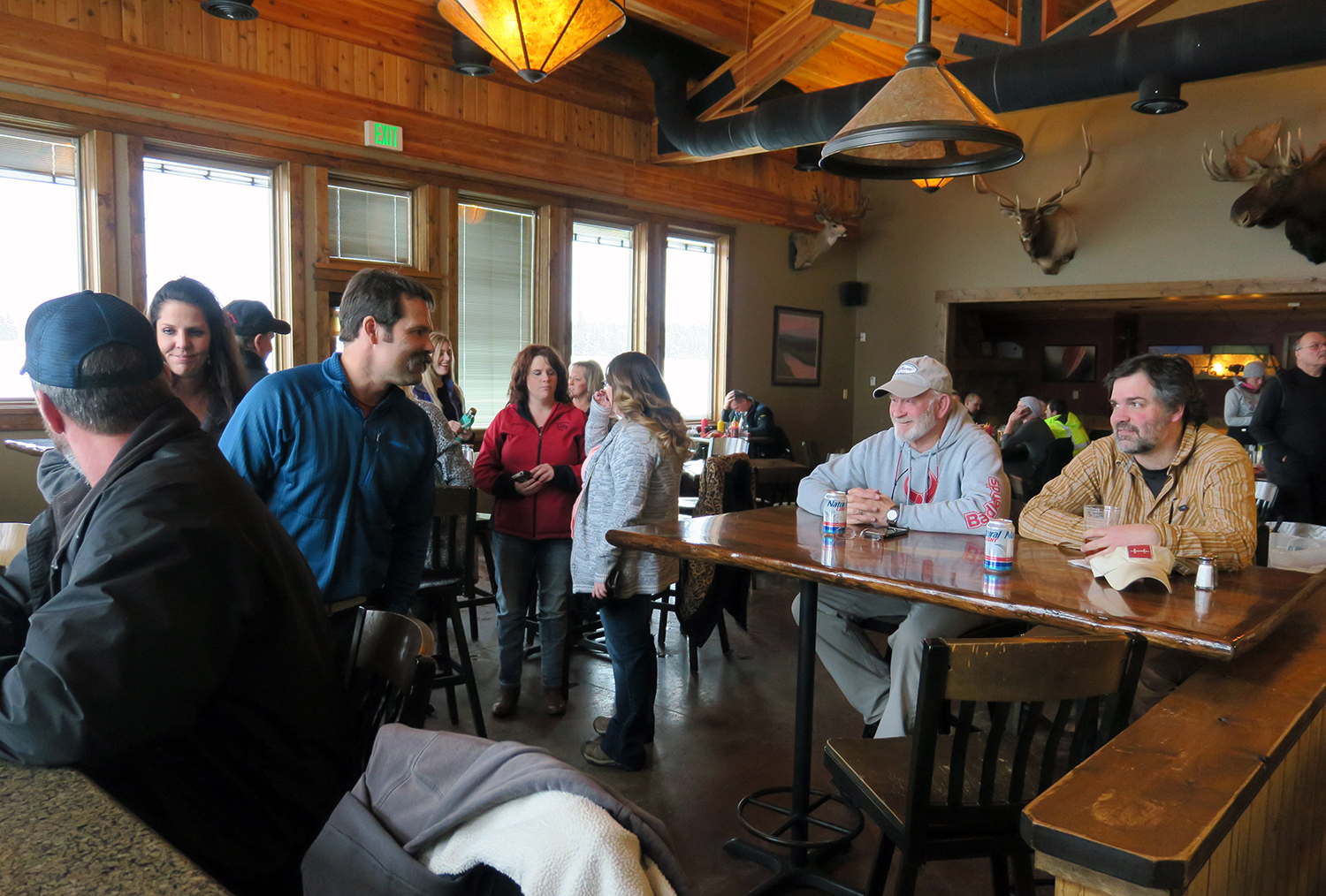 Stepping through an adjoining door, we found the TroutHunter Bar and Grill to be filling with a lively crowd of snowmobile pilots that were ending a day’s ride as snow and the temperature began to fall.

One must talk louder in a busy crowd but the need on that day was amplified by the roar of snowmobiles directly outside the backdoor of the restaurant. However, the opportunity to catch up with friends I had not seen since the holidays was not deterred by the fun loving customers.

Seated at a tall table near the bar, our conversation covered a variety of subjects from family updates to the chaos of American politics. Naturally, the condition of the river and its fishery was the most dominant topic.

There was plenty to consider during the snowy drive back to St. Anthony but, as usual, my spirit was lifted by the stimulating visit with special friends. With any luck, my next visit to Last Chance will include some early midge fishing with those same impressive people.

Like several other recently departed friends, I knew Bobby Jones as a young man-----and I watched him grow old along the Henry’s Fork.

Bobby’s love for fly fishing was expressed in his exquisitely tied flies, which he would willingly share with anyone. An accomplished rod builder as well, Bobby’s custom fly rods were appreciated and used by some of the most particular Henry’s Fork regulars, though profit was never a motive for the craft.

As a hard-working and dedicated family man, Bobby was a man of honor, and his character was demonstrated on the river he loved. Although he certainly caught his share, I never knew him to exaggerate the number or size of his catch.

Bobby Jones will be remembered as a kind, generous man whose presence was always welcome in any angling circle. Sadly, only a handful of his generation remain as the wisdom keepers of the river, and I fear that they will never be truly replaced.